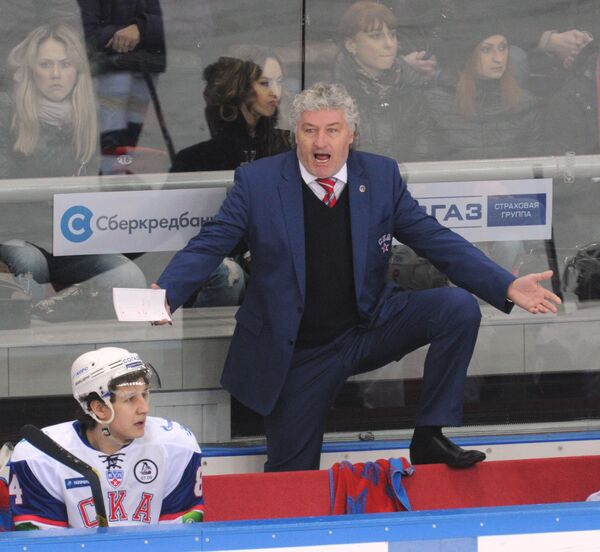 SKA St. Petersburg may fire coach Milos Riha after the team crashed out of the KHL playoffs with a 4-0 defeat to Dynamo Moscow, SKA general manager Alexey Katsatonov told RIA Novosti on Thursday.

Big-spending SKA fields several ex-NHL players and hired Riha after he led Atlant Moscow Region to the 2011 Gagarin Cup final, knocking out SKA on the way.

The SKA board will meet to decide whether Riha should coach the team next year, Katsatonov said.

“There will be an analysis of the season. Whether or not Riha continues to work with SKA will be decided by our club’s board of directors,” said Katsatonov, who spent seven seasons in the NHL as a player.

As Riha left Moscow’s Luzhniki arena after the final 6-1 defeat to Dynamo, he was jeered by a crowd of SKA fans, chanting: “There’s no place for Riha in St. Pete.”

There were tensions between Riha and some SKA fans, Katsatonov admitted, but these were because of the Czech’s previous work at longtime rival Spartak Moscow, not because of any failings as a coach, he said.

“The fans’ problems with Milos Riha do not originate because of what sort of coach he is, but because he worked at Spartak,” he said.

“Over the course of the season, to be honest, I haven’t any aggression towards Riha from the fans.”

Katsatonov earlier compared Riha to a captain abandoning his sinking ship after he left the bench in the dying seconds of SKA’s 3-1 playoff defeat in the second match of the series with Dynamo.

The Czech coach has won one Czech and two Slovak league titles, and has also coached KHL team Spartak Moscow.

Katsatonov started his career at SKA and won Olympic gold medals as a defenseman for the Soviet Union team in 1984 and 1988, before joining the NHL with the New Jersey Devils in 1989.

He also played for the Mighty Ducks of Anaheim, the St. Louis Blues and the Boston Bruins before hanging up his skates in 1997.