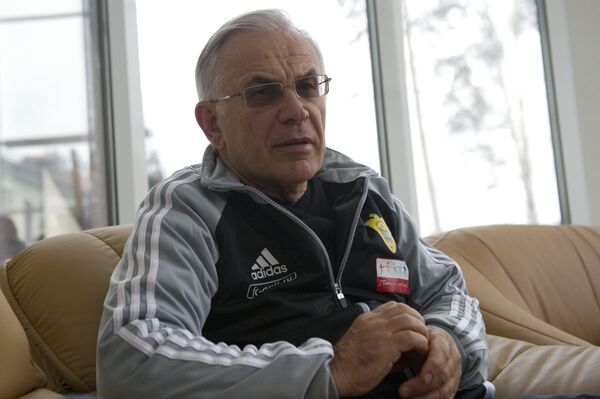 Guus Hiddink’s Anzhi team is not performing to its potential and is “simply toothless” in attack, former Anzhi coach Gadzhi Gadzhiev said Thursday.

Since Hiddink took over in February, Anzhi have picked up eight points from seven games, scoring just five times, with wins over Dynamo Moscow and Dan Petrescu’s FC Kuban.

“Currently, Anzhi is playing below its potential in any case,” Gadzhiev told Russian website rusfootball.ru.

“Yes, the team functions in defense, but it looks simply toothless in attack.”

Hiddink made a tactical blunder in Anzhi’s 1-0 defeat to Rubin Kazan on Sunday, Gadzhiev suggested.

“I didn’t understand why, in the last game against Rubin, the winger Mehdi Carcela-Gonzalez was in the centre-forward position,” he said.

“He just doesn’t have the necessary qualities to be a centre-forward. It’s obvious the experiment didn’t work.”

Gadzhiev was sacked as Anzhi coach in September and replaced by first caretaker player-coach Roberto Carlos, then Yuri Krasnozhan, before Hiddink was hired.

In a forty-year coaching career, Gadzhiev has spent three spells at Anzhi, as well as a period in charge of former crosstown rivals Dynamo Makhachkala and time as Russia assistant coach.

Hiddink led Russia’s charge to the semifinals of Euro 2008, and has reached the World Cup semifinals with his native Netherlands and South Korea.