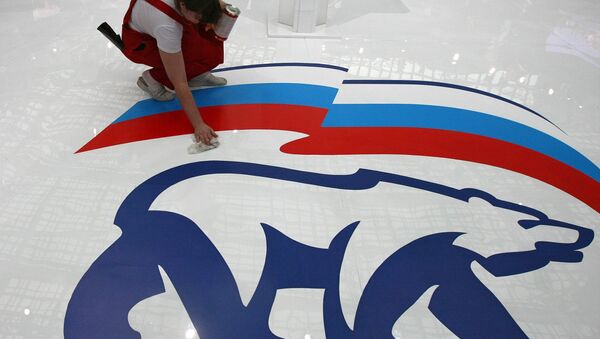 © Sputnik / Alexey Nikolsky
/
Go to the photo bank
Subscribe
The party that has dominated Russia’s political landscape under Vladimir Putin for a decade is in disarray following a stunning nosedive in its popularity this winter and is scrambling to “reinvent” itself to cope with fierce future competition, analysts and party officials said.

The party that has dominated Russia’s political landscape under Vladimir Putin for a decade is in disarray following a stunning nosedive in its popularity this winter and is scrambling to “reinvent” itself to cope with fierce future competition, analysts and party officials said.

“United Russia has no chance of remaining unchanged,” said pundit and party supporter Sergei Markov, who was a member of United Russia’s faction in the previous State Duma.

As outgoing President Dmitry Medvedev is preparing to sign into law a bill expected to result in creation of many new parties, the incumbent “party of power” is looking to both clarify and diversify its ideological stance to retain slipping public support, United Russia officials said.

In a clear indication of the looming crisis, Prime Minister Vladimir Putin, who heads United Russia without being a card-carrying member, refused to use it as a vehicle for his own successful presidential campaign earlier this year.

The point was driven home by mayoral elections in regional capital Yaroslavl on Sunday, when an independent backed by several opposition parties soundly trounced a United Russia candidate, winning almost 70 percent of the vote. At its peak, the party controlled all regional legislatures and capitals nationwide.

United Russia will discuss the revamp at a snap party congress, expected to take place in late May or June, senior party official Sergei Neverov was quoted by the Kommersant daily on Monday. He did not rule out that Putin will give up party leadership.

Party apparatchiks are currently locked in a turf war over whether to keep it as one entity or split it, said a political analyst who worked for United Russia. He asked not to be identified to avoid problems with party officials.

Markov denied a possible split, saying that the plan is instead to create within United Russia three clear-cut ideological factions, including a liberal, a leftist and a patriotic one

“We’re discussing how to improve,” Andrei Ilnitsky, the founder of a liberal club within United Russia, told Lenta.ru in an interview last week. He did not elaborate, but noted that neither the liberals nor the left currently have a proper representation in Russian party politics.

United Russia needs a more flexible and diversified ideology, with main platforms to be defined at a referendum within the party, Deputy Duma Speaker Oleg Morozov, a party member, said on Monday.

Since its inception in 2001, United Russia promoted a vaguely conservative ideology, but focused primarily on rubberstamping Kremlin- and government-backed bills despite their ideological content. This had mixed results, allowing for both relatively quick recovery from the 2008 economic recession and introduction of laws curtailing civil and political freedoms.

The party needs to move to the right, targeting the middle class while opposing the worldwide trend toward leftist politics, senior United Russia official Vladimir Pligin, another member of the liberal club, said last week.

Putin’s own policies, however, have been leaning toward the left lately, with additional social spending that he promised during the presidential campaign amounting to at least 5.1 trillion rubles ($170 billion), according to estimates by Sberbank analysts.

“The split looks like a dead end,” said Yevgeny Minchenko of the Institute for Political Expertise think-tank. “Their core ideology is love of the authorities, but what’s the difference going to be between various parties’ love?”

But Pavel Salin of the Center for Political Assessment said that United Russia “needs more distinct ideological pigeonholing, which means a split is likely.”

United Russia steadily lost popularity throughout last year, and barely clung to a slim majority at the parliamentary vote in December, winning 238 of 450 seats in the State Duma, compared to 315 in 2007.

The victory was ridden with fraud allegations that triggered street protests in Moscow where tens of thousands of participants decried United Russia as the “party of crooks and thieves.”

The protests prompted Medvedev to ease draconian party registration rules introduced by his predecessor Vladimir Putin, a move that is expected to usher in dozens of new parties, most of them oppositional.

The party has historically served as the main political vehicle for Putin, who was president from 2000 to 2008, when he endorsed Medvedev as his successor while retaining formidable political influence as prime minister.

United Russia still has a support rating of 48 percent, according to a poll by Levada Center released late last month. But the survey did not include any of the 68 parties that already lined up for registration with the Justice Ministry.

United Russia’s decline is due to its failure to settle on an ideology, exacerbated by voters’ discontent over the recent economic downturn and rampant corruption in the country, for which the “party of power” is being held responsible, experts contacted by RIA Novosti said.

Analysts agreed that the revamp, regardless of form, can stall, but not reverse the popularity slide for United Russia.

The United Russia brand is likely to be discarded, but the “party of power” will probably survive under a different name and with new faces at the helm, said Minchenko of the Institute for Political Expertise.

“A support rating of 25 percent would suffice for political control of the country,” he said.