Opposition Leader Calls For May 5 ‘March of Millions’ 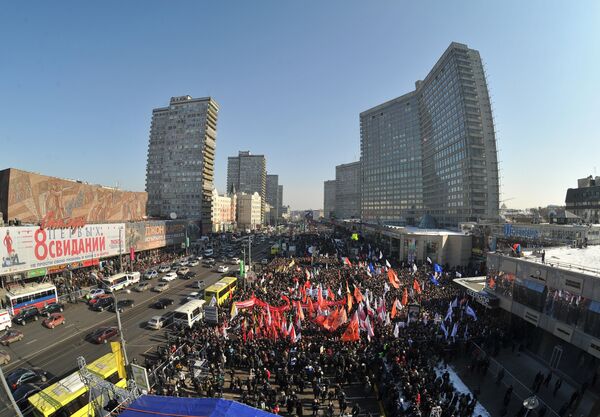 © RIA Novosti . Ramil Sitdikov
/
Go to the photo bank
Subscribe
Leftist leader Sergei Udaltsov proposed to hold a “march of millions” in Moscow on May 5, two days before the inauguration of president-elect Vladimir Putin, whose victory Udaltsov calls unfair.

Leftist leader Sergei Udaltsov proposed to hold a “march of millions” in Moscow on May 5, two days before the inauguration of president-elect Vladimir Putin, whose victory Udaltsov calls unfair.

The protest is to be a follow-up to a string of anti-Putin rallies that took place in the capital between December and March, most of them attracting tens of thousands, Udaltsov said on his blog on Ekho Moskvy radio’s website.

“If the authorities have ignored a rally of a hundred thousand, we need to bring out more,” Udaltsov said on Wednesday afternoon. He said he will urge residents of regions around Moscow to join.

The rally is to demand repeat presidential and parliamentary elections, carried by Putin and his United Russia party, respectively, amid vote fraud allegations, Udaltsov said.

“Let’s come out to one of Moscow squares and not leave if we’re numerous enough,” Udaltsov said. He has championed in recent weeks the idea of a prolonged street protest, though all attempts to stage one were immediately ended by police. Fellow protest leader Alexei Navalny was fined 1,000 rubles ($33) on Thursday over allegedly disobeying police during such a protest on March 5.

Udaltsov proposed earlier to turn the Labor Day demonstration on May 1 into a “march of millions.” He did not elaborate on what prompted the date change.

Neither Moscow City Hall nor opposition leaders have commented on the proposal. Most protest organizers said earlier this month that with the election cycle completed, the rally season was over for a while.