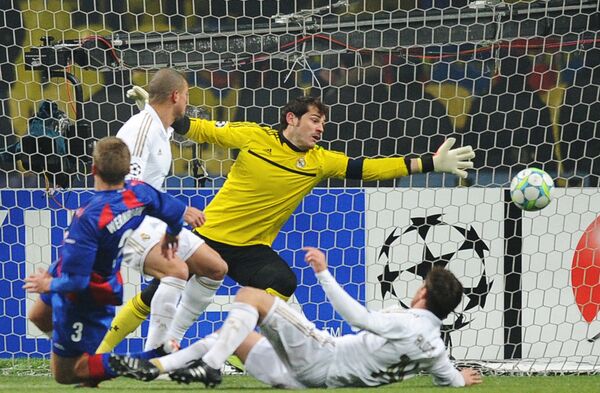 CSKA Moscow coach Leonid Slutsky admits getting past Real Madrid in the Champions League on Wednesday will take a “miracle.”

CSKA Moscow coach Leonid Slutsky admits getting past Real Madrid in the Champions League on Wednesday will take a “miracle.”

A debut goal from Pontus Wernbloom saved a draw for CSKA with the last kick of the first leg, leveling the scores at 1-1 after Cristiano Ronaldo’s opener.

“There’s a low probability [of success]. But sometimes miracles happen, and we hope that we will be able to make a miracle like that,” Slutsky told Russian newspaper Sport-Express.

He suggested he would rethink his attacking strategy for the return leg.

“In the Real game we weren’t successful with our planned attacking moves, but I have minimal gripes over the defense,” he said.

CSKA, unbeaten away in Europe this season, are near full strength, barring first-choice goalkeeper Igor Akinfeev's long-standing knee injury. Japanese playmaker Keisuke Honda missed a training session Tuesday to have a medical examination on a thigh injury, and has yet to play an entire match in 2012.

For Real, Karim Benzema may start for the first time since he limped off just 16 minutes into the game in Moscow. The Frenchman played as a substitute in Real’s 3-2 win over Real Betis on Saturday, Jose Mourinho's 100th game in charge.

CSKA have drawn their two league games since the first leg, 2-2 against Zenit St. Petersburg and 1-1 against local rivals Dynamo Moscow on Friday.

The army side can draw strength from their 2-1 final group game defeat of Inter Milan at the San Siro in December to seal their qualification for the knockout rounds.

Their last European away defeat came a year ago, losing 2-1 to Porto in the Europa League last 16.