Isinbayeva: I Was Close to Quitting 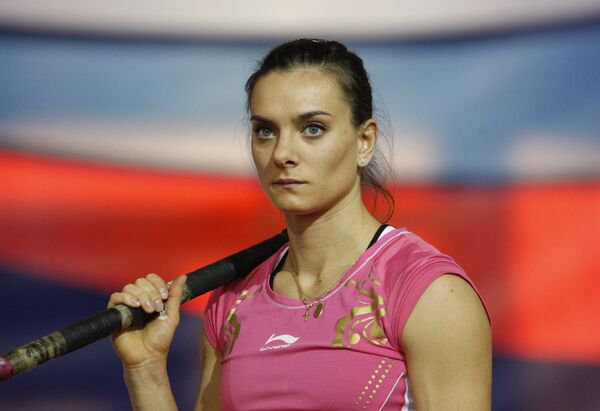 Russian pole vault world record holder Yelena Isinbayeva would have quit the sport if the coach she calls her "second father" hadn't taken her back last year, she has told RIA Novosti.

Russian pole vault world record holder Yelena Isinbayeva would have quit the sport if the coach she calls her "second father" hadn't taken her back last year, she has told RIA Novosti.

Isinbayeva dropped Trofimov in 2005, but went to her home city of Volgograd to seek his forgiveness in March 2011, and says she would have quit the sport if he refused to take her back.

"I understood: either him or no-one. With that thought I went to Volgograd: either Evgeny Vasilevich [Tromifov] or the end of my career," she said in an exclusive interview with RIA Novosti this week.

"And, thank God, my career continues."

Trofimov encouraged a 15-year-old Isinbayeva to try pole vaulting in 1997 after she failed as a gymnast. He developed her prodigious talent, training her until 2005, when she dropped him in favor of working with former men's world record holder Sergey Bubka.

Isinbayeva was far ahead of the competition between 2003 and 2009, when she set 27 world records, but her form tailed off in 2010 and she took a break from the sport.

This led to an epiphany when she realized she was missing Trofimov, she said.

"I understood that something wasn't right when I started to lose. I started to delve into myself. And that's how I realized that the problem was something different, and that only Evgeny Vasilevich could raise me to a new level."

She chose to meet Trofimov on a day when Orthodox Christians ask forgiveness for their sins, she said.

"We met. The conversation was straightforward. It was like the return of the prodigal daughter; I left, wandered and returned."

She added: "He's like a father to me. A second father. And parents forgive their children."

Trofimov said that their first meeting was extremely emotional.

"That moment was very difficult, even dramatic. Then, on March 8, she returned to our home with her parents and we finally decided to work together again."

"It was as if everything was washed away, as if nothing had happened, and I continued to work with her like that."

Isinbayeva and Trofimov have an exceptionally close bond, she said.

"We work without any snags. In full understanding, in complete mutual respect. He's a professional, he's a great coach and I'm happy to do what he tells me."

"Sometimes we don't even need to speak. I understand him from syllables, from brief looks."

Isinbaeyeva will seek her third Olympic gold medal in succession in London this summer, and is also a double world outdoor championship and three-time world indoor champion.