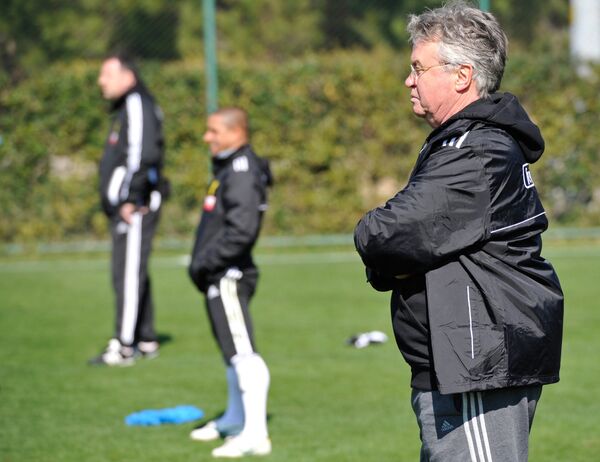 Guus Hiddink won his first game in charge at Anzhi Makhachkala on Monday, a close-range goal from Jucilei gving his side a 1-0 away win over Dynamo Moscow.

Guus Hiddink won his first game in charge at Anzhi Makhachkala on Monday, a close-range goal from Jucilei gving his side a 1-0 away win over Dynamo Moscow.

That result keeps Rubin in sixth, level on 56 points with Lokomotiv Moscow.

At the Khimi Arena, Anzhi won a tight match when Jucilei lashed in a rebound on 68 minutes after Dynamo Moscow failed to clear the ball from a free-kick.

Dynamo could have pulled level deep into stoppage time, but young striker Fyodor Smolov blazed the ball over the bar from close range.

Dynamo fall eight points behind leaders Zenit St. Petersburg who have 66 points after a 2-2 with CSKA Moscow on Saturday.

Anzhi came close to a goal on 18 minutes when Samuel Eto’o hit the post after a one-two with Jucilei.

On 26 minutes, Granat sent a precise 30-yard pass through the Anzhi defense to find Igor Semshov, but goalkeeper Vladimir Gabulov plucked the Dynamo midfielder’s lob out of the air.

Zhirkov blasting a fierce shot against the crossbar on 69 minutes.

On 77 minutes, Dynamo's Semshov missed his second chance of the game when he fired wide of the post.

Dynamo substitute Felix Yususpov blazed over the bar with a long shot on 86 minutes when the ball fell to him after a goalmouth scramble.

In Kazan, Emenike had the clearest chance of a dour first half, volleying across the face of Sergei Ryzhikov's goal from five yards out on 37 minutes.

Gokdeniz Karadeniz spurned two early opportunities for the hosts, firing a volley straight at Spartak goalkeeper Andriy Dikan and then striking wide from the right.

After Sharonov's opener, Nelson Valdes could have doubled the lead but contrived to head over from point-blank range.

The Paraguayan then went clean through on goal but his shot was blocked by a recovering defender on the hour.

Earlier, ninth-placed FC Krasnodar opened a nine-point lead over tenth-placed FC Rostov with a last-gasp 1-0 home win over their southern rivals in a bad-tempered match that saw 10 yellow cards awarded.

Pavel Golyshev grabbed the three points with a header past Rostov goalkeeper Stipe Pletikosa in the 89th minute from Joaozinho’s cross.