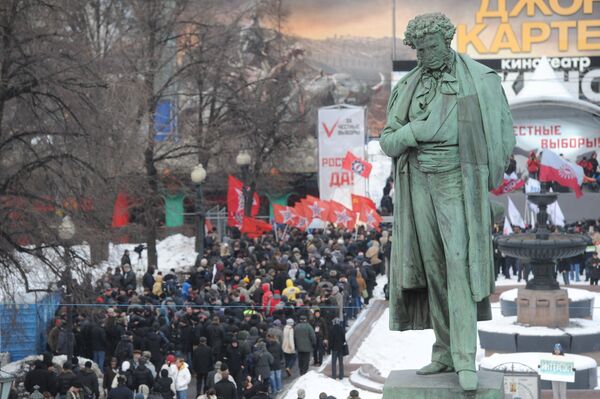 Thousands of opponents of president-elect Vladimir Putin rallied on Pushkinskaya Square in downtown Moscow on Monday evening to denounce his victory at the presidential polls as illegitimate, an event that ended with hundreds of protesters detained.

Thousands of opponents of president-elect Vladimir Putin rallied on Pushkinskaya Square in downtown Moscow on Monday evening to denounce his victory at the presidential polls as illegitimate, an event that ended with hundreds of protesters detained.

"I'm filled with hatred toward these elections, and I will never recognize them," leftist leader Sergei Udaltsov said at the rally.

Prime Minister Putin, 59, is returning to the Kremlin for a third non-consecutive term in office. He trounced the rivals with 63.6 percent of the vote, according to final figures from Central Election Commission.

Election and police officials have acknowledged violations, but insisted they were too small to have a significant impact on the vote’s outcome. Putin has ordered investigations into all violation reports.

Police said that the turnout at the anti-Putin rally, titled “For Fair Elections” stood at 14,000. Organizers said at least 20,000 showed up.

The venue was completely crowded some time before the speakers took the floor, a RIA Novosti correspondent reported from Pushkinskaya Square.The crowd broke into chants of “Russia Without Putin” from time to time.

“Sunday’s elections were a farce. Putin named himself president, said Stanislav Zhenov, an office worker who participated in the rally. “We need to keep coming out until something changes.”

“You have stolen from us!” whistleblowing activist Alexei Navalny shouted into microphone, referring to the authorities.

Presidential candidate Mikhail Prokhorov, a tycoon who targeted the middle class and was the second runner-up with 7.9 percent of the vote, also took the stage to renew his pledge to establish a political party. His appearance elicited a mixed reaction of boos and cheers.

The City Hall was reluctant to sanction the grassroots protest rally, denying organizers all three preferred venues last week. Only after some 5,000 signed up, also on Facebook, to rally in defiance of the ban, did the Moscow authorities and the organizers work out a compromise.

Police invited Udaltsov and fellow opposition politician Ilya Yashin for a “preventive talk” ahead of the rally on Monday, but both refused to attend.

Dozens of trucks with riot police rolled into downtown Moscow on Monday, and a helicopter patrolled the sky over Pushkinskaya Square at the rally’s start. City police officials threatened to crack down on anyone violating rules for public rallies.

Four massive anti-Putin rallies took place in Moscow since the parliamentary elections in December, each gathering tens of thousands. All ended without incidents, even earning them praise from Putin for their peaceful nature.

Opposition leader Boris Nemtsov said the event on Pushkinskaya Square will be followed at 9 p.m. by a flashmob in which silent protesters encircle the Kremlin in a human chain. But police cordoned off all areas near the Kremlin, preventing the flashmob from happening.

Some nationalists tried to walk toward the Kremlin from Pushkin Square after the rally, but were blocked by riot police, who were herding protesters into the metro. Officers detained about 20 protesters, manhandling some of them.

An hour and a half after the rally in Moscow ended riot police moved into a tense standoff with the several hundred people who remained at Pushkinskaya Square.

“Police, you are breaking the law,” one of the leaders of the rally, Duma deputy Ilya Ponomaryov shouted at them.

Police used loudspeakers to tell protesters to clear the square, where Udaltsov and his supporters intended to stage a permanent protest against Putin.

One of the protesters, Gleb Gladkikh, waving a Yabloko party flag next to the monument to Alexander Pushkin, said that he would not leave the spot until all demands of the rally are met.

A teenage boy ran through the crowd, shouting “Tents this way,” but was scolded by protesters as a provocateur.

Some 3,000 refused to leave the venue after the rally’s end, State Duma deputy Ilya Ponomaryov, a speaker at the rally, told Dozhd online television.

Ponomaryov said the follow-up event was formally a meeting with him, which means it required no police sanction. But riot police insisted the event was unsanctioned and told the protesters to disperse.

Officers eventually formed a human chain and moved to push protesters from the square. Dozens were detained, among them Navalny, Udaltsov and liberal politician Ilya Yashin.

An amateur video from the site run by Dozhd showed officers march across the square and demand that the public leave the venue. It did not show them detain anyone.

Several hundreds of protesters pushed away from Pushkin Square staged an improvised rally, marching away from the Kremlin down the Tverskaya Street. Police tried to disperse them by the nearby Triumfalnaya Square, also detaining some. Meanwhile, between 30 and 40 protesters trickled back to Pushkin Square, shouting opposition slogans.

In total, 250 were detained after protest events in Moscow on Monday, city police said.

Monday's protests were kicked off by a rally by the Communist party, whose presidential candidate Gennady Zyuganov was the runner-up on Sunday with 17.2 percent of the vote. Police said some 300 showed up for the event, which took place on Pushkinskaya Square before the larger grassroots event.

About 100 activists of the radical opposition group The Other Russia were detained during an unsanctioned protest near the office of the Central Elections Commission in downtown Moscow on Monday. Police said about 50 were held.

Novelist-turned-politician Eduard Limonov, who heads The Other Russia, was among those detained, the group’s spokesman said.

At least 800 came to an unsanctioned opposition rally at St. Petersburg’s Isaakiyevsky Square the same evening, with 300 of them detained, local police said.