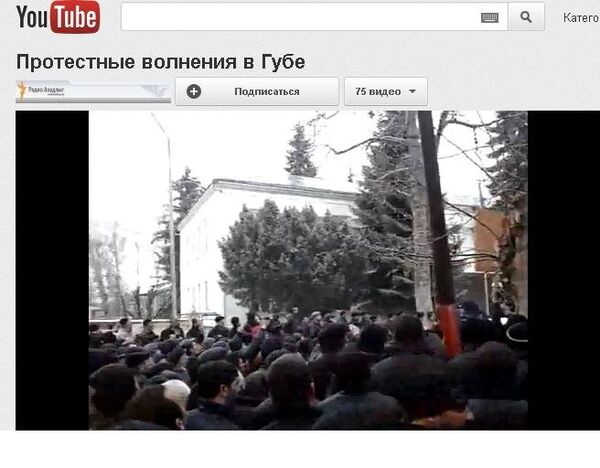 About 10,000 rallied against local administration in the town of Quba in northern Azerbaijan on Thursday, clashing with police swiftly brought in from neighboring regions.

About 10,000 rallied against local administration in the town of Quba in northern Azerbaijan on Thursday, clashing with police swiftly brought in from neighboring regions.

Police detained some 200 protesters after a rally on Thursday morning, but that only fanned the protests in the town of 23,000 some 170 kilometers north of the capital Baku, local news website Contact.az said.

Police, who received reinforcement from surrounding precincts, were using tear gas and preparing water cannons and police dogs to disperse the crowd, the report said. Internet and mobile phone network connections were patchy in the area.

Transportation Minister Ziya Mamedov, a relative of Khabibov, tried to reason with the protesters, but failed to prevent them from clashing with police.

Khabibov personally apologized to protesters, who demanded his resignation, but also failed to placate them, Aysor.am news website said.

Aliyev did not comment on the situation, but held a meeting with chiefs of law enforcement agencies in Baku on Thursday, Contact.az said, citing no sources.

Several videos from the site posted on YouTube showed a sizeable crowd rallying in the streets, but did not document any clashes.

The incident was apparently triggered by whistleblowing allegations against Khabibov. Videos posted online showed expensive real estate ascribed to the district head, who, critics alleged, built it with money obtained from graft.

The videos prompted Khabibov to publicly denounce his opponents as “traitors” and “sellouts,” which, in turn, triggered the street protests.