How to Measure a Moscow Street in Protesters 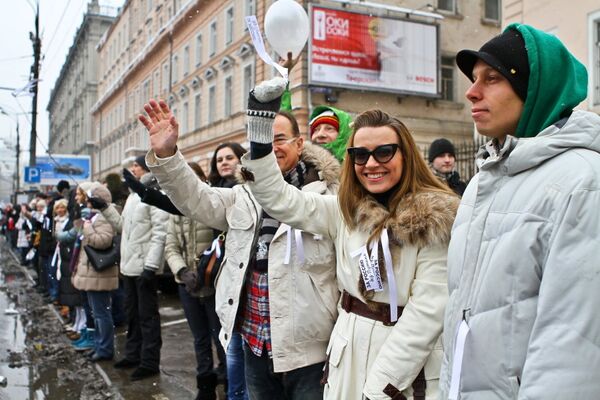 In a classic Soviet cartoon, a bunch of jungle animals measured their friend the boa constrictor in parrots. This Sunday, the Garden Ring in Moscow was given a similar treatment, only instead of exotic creatures its whole length was spanned by thousands of opposition protesters.

In a classic Soviet cartoon, a bunch of jungle animals measured their friend the boa constrictor in parrots. This Sunday, the Garden Ring in Moscow was given a similar treatment, only instead of exotic creatures its whole length was spanned by thousands of opposition protesters.

No one really thinks of the Garden Ring as a street, at 15 kilometers, it is part of the landscape. However, the human chain that lined up along its sidewalks gave a vivid reminder of its length and of the amount of people disgruntled with the government and its head, Prime Minister Vladimir Putin. The flashmob around the downtown Garden Ring had a turnout estimated between 11,000 by police and 40,000 by organizers.

“Everything is decided for us and we’re fed up with that,” said Lyubov Troshenskaya, the wife of former Interior Troops officer Viktor, who nodded in agreement as they held hands in the human chain near Oktyabrskaya metro.

Putin s poised to return to the Kremlin for a third, non-consecutive term in office in elections on March 4 that saw authorities carefully weeding out his competitors. The prospect does not make many in country’s budding middle class happy and it rallied in the tens of thousands against Putin’s expected return to power since December.

Though the Sunday protest was smaller than at the three biggest rallies this winter, the mood was the same.

Protesters carried white ribbons, scarves and shouted and waved at passing cars, every second of which was also adorned with white and honked back jubilantly.

Justifying the “creative class” label slapped on protesters by the Kremlin, many in the human chain touted cameras and snapped pictures of fellow participants. Some defied the ban on visual propaganda and put stickers on their lapels with Russian-language puns poking fun of Putin’s presidential ambitions. A banner reading, “Better to be honest than to be Putin,” was attached to a streetlamp.

Passers-by could not help but stare, though not all were supportive. “Who, if not Putin?” a female pensioner huffed indignantly.

“There is much I don’t like now but I made a conscious decision to vote Putin,” said the woman, who only identified herself as Galina, 65.

A group of Putin supporters swarmed by the Park Kultury metro, making up for their modest numbers, barely a hundred, with loud chants. One of them harassed an opposition activist for providing free tea (he called himself “the chief water boiler of the revolution”) because, as the Putin supporter put it, the tea and cookies had to be paid for, which means it could not be a grassroots effort, so they must have been getting funding from somewhere.