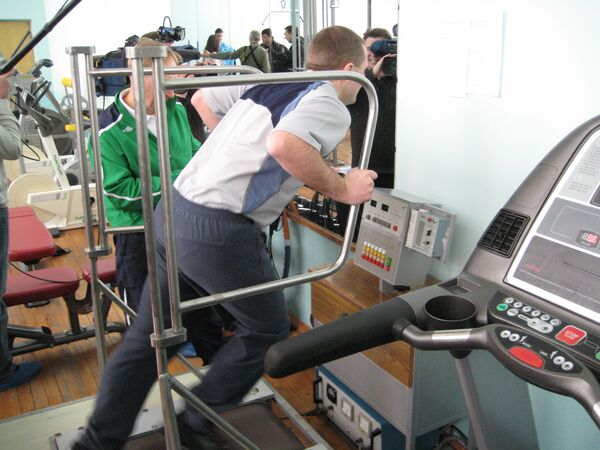 So you want to be a cosmonaut? Now is your chance, but prepare to be tested like one.

So you want to be a cosmonaut? Now is your chance, but prepare to be tested like one.

The countdown is on for Russia’s first ever open cosmonaut recruitment drive, and while organizers wait for the tidal wave of applications to finally rush in, they decided to lay bare the admission tests to the space-loving masses.

Most tests demonstrated to the media during a press tour of the cosmonaut training facility in Star City this week look deceptively simple, ranging from spot-a-dot attention exercises to good old trampoline jumping.

However, some, such as the “vestibular chair,” are more vexing, and all are rigorous and devilishly hard to execute. Flashy is not a keyword in Star City, but its trials give convincing proof of why only half a dozen contestants will graduate to hear the real countdown on the launch pad six years from now.

Tucked away in a pine forest 25 kilometers east of Moscow, Star City looks like a research town from a Soviet dream, its facilities freely sprawling among the cozy alleys and lawns in a seemingly endless pattern – a sort of a garden of stones, only instead of stones there are buildings of grey brick. Of course, it’s well fenced.

People are few and far between, and it is very quiet, all sound muffled by the snow – except from bursts of noise from low-flying jets bound for nearby Chkalovsky Airport. But the noise of technology does not seem out of place; after all, the first man in space, Yury Gagarin, was a pilot too.

There are a few of Gagarin’s colleagues in the running this year, but the majority of the current 50 applicants work in the space industry, the traditional talent pool for space voyages, Sergei Krikalev, head of Star City’s Gagarin Cosmonaut Training Center, told reporters Tuesday.

The number of applicants looks disappointing, compared to thousands who applied to be cosmonaut in Soviet times, said Krikalev, 53, himself a former spaceman and a world record holder for combined time spent in the orbit with 803 days.

But organizers are still counting on most applications to arrive close to the deadline of March 15, given the copious medical and legal paperwork the procedure requires, Krikalev said. He refused to say how many applicants his center expects.

“This is a social experiment designed to tell us about priorities of our society,” Krikalev said about the open recruitment drive. He did his best to hide the bitterness in his voice.

The project is to provide Russia with five to seven cosmonauts trained for flights to the International Space Station and related missions. The education of a cosmonaut takes at least six years, and recruits will not fly into orbit until at least 2018.

But before that, their applications will be winnowed by the organizers, and those who make it past the first round of checks will be invited for medical, psychological and physical testing at Star City.

The current deadline for testing at Star City is April 30, but Krikalev said the organizers will ask the Federal Space Agency to push it back to December or possibly next year, in line with global practice. It does not seem excessive, given that the candidates will not be expected to give up their day jobs and would only come to Star City occasionally, as the tests mandate.

A typical gym with treadmills and irons to pump, an instructor with the looks of a physical education teacher who shoos his trainees away to a ski course when the reporters are herded in. The physical skill testing looks the most commonplace, and if you’re a sporty type, chances are, you have been preparing for it all your life – or at least for some of it.

“You don’t have to be an athlete to pass, just be in a good physical condition,” said Yevgeny Shemchuk, who supervises cosmonaut workouts at Star City.

The two exercises he demonstrated to reporters were treadmill and trampoline. The treadmill is not automatic – you make it spin with your own muscles – and looked every inch a Soviet relic, all function and no design.

However, it turned out to be the twin of a treadmill installed on the International Space Station.

Meanwhile, the speed and stamina that the cosmonaut hopefuls have to show walking, jogging and running – a program of more than 10 minutes at varying speeds – are formidable, judging by the hard breath and beads of sweat on the brow of the volunteer, a portly bundle of muscle who works as a space suit instructor.

The volunteer, Oleg Blinov, turned out to also be an applicant for the cosmonaut drive. It is his third try, and he spoke about it with utmost caution and a shy smile.

RIA Novosti wished him luck, and it looked like he could use some: his performance at the trampoline was unstable, and he kept mixing up 180- and 360-degree turns.

The trick is to cover all physical skills from brute power and stamina to coordination and speed, Shemchuk told RIA Novosti. The full test includes 12 exercises, and just being good at some sport is unlikely to get recruits through all of them.

Want to Talk About It?

In the psychologist’s office, a trainee was facing a laptop while clicking an unusually simple joystick, also looking convincingly primitive and unpolished – you could tell it was no toy.

On the screen, dozens of circles of all colors and sizes bloomed and faded. The recruit was to look for only one type – red with yellow rim – and hit the button every time he spotted one. He missed every one in four or five, though a dozen reporters breathing down his neck probably contributed.

Immunity to distraction – usually tested without the reporters – is a crucial skill for a cosmonaut in situations such as docking in orbit, psychologist Zhanna Shevchenko said.

The computerized testing, which covers many other aspects of the candidates’ mental skills, is based on a system used to train military pilots, she said.

But that’s only part of it. The test for recruits lasts four to six hours and also includes a lengthy interview – a chitchat on anything that may affect your future behavior when locked up in orbit with two other guys or girls for six months – as well as standardized testing to measure the candidate’s social skills, intellect, memory, attention and personality, Shevchenko said.

“Most cosmonauts have sanguine personalities, strong and cool-headed,” said her colleague Natalya Filippova. They usually also have a good sense of humor – a sine qua non to defuse conflicts budding in a locked space during expeditions, she said.

Toothache in the Sky

The chair was fenced with bright striped tape that screamed caution. It took the medics some minutes’ coercing to extract a volunteer from among the reporters, and though the test looked easy enough, he got up reeling and with his speech slurred.

The vestibular chair is designed to, predictably, test one’s balance skills. You sit in it with eyes closed, and as it gently revolves at two spins a second, you bob your head to the rhythmic beeping. Simple, but no one makes it through the required 10 minutes on the first try.

Then there is also the zero gravity test, in which trainees are strapped to a bed and tilted head down at 15 or 30 degrees for up to six minutes, which, according to the medics, is more than enough to go unconscious.

Balance and gravity skills are naturally low with most people, but can be boosted, said Larisa Shuvatova, head of the medical diagnostics department at the Gagarin Cosmonaut Training Center.

But there is a myriad other ways to fail medical testing, which examines not just recruit’s health, but also predilection for various illnesses in the future – a wise move, given that there are no doctors in orbit.

“Imagine if you get a toothache there?” Shuvatova asked, pointing heavenward. All cosmonauts get medical training, but there is a limit to what they can do, she added: there were no surgeries in orbit in her almost 30 years at the job. There was no need for one, either, but that’s due to all the tests run in Star City and other places like this.

The reporter who dared try the vestibular chair was a young muscular guy who sat through the test with a faint smile. But when the media went packing some 20 minutes later, he still complained of reeling, and that was after a fraction of what the cosmonauts must endure.

So maybe Gagarin Cosmonaut Training Center chief Krikalev should not sound bitter, after all. Maybe – just maybe – the Russians just are aware that you do not apply to be a cosmonaut if you haven’t got what it takes to be one. After all, even this year’s NASA recruitment drive, which garnered 6,300 applications, will also produce only six astronauts, same as Russia.

Each of them, of course, will feel as much at ease in the vestibular chair as a Star City graduate.