Lokomotiv Fight Back for 2-1 Win Over Athletic Bilbao 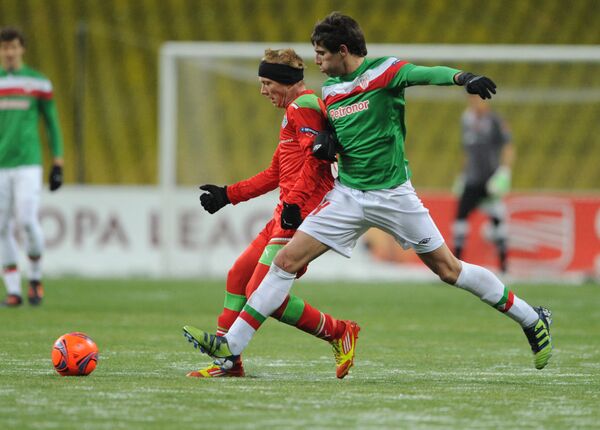 Felipe Caicedo's half-volley gave Lokomotiv Moscow a 2-1 comeback victory over Athletic Bilbao in the first leg of their Europa League tie on Thursday.

Felipe Caicedo's half-volley gave Lokomotiv Moscow a 2-1 comeback victory over Athletic Bilbao in the first leg of their Europa League tie on Thursday.

The Ecuadorian's winner came on 73 minutes, calmly placing the ball into the corner from 16 yards out after bringing down a tricky cross from the left.

Athletic's 19-year-old striker Iker Muniain opened the scoring on 36 minutes, firing into the corner after Markel Susaeta drifted in from the right flank and beat two players to supply the assist.

Russia international Denis Glushakov equalized from the penalty spot in the second half after Caicedo was felled by Bilbao's Jon Aurtenetxe.

The second leg is in Spain on February 23.

"In the first half their better form showed, and we made life difficult for ourselves with a sloppy goal, but we put it right with an excellent showing in the second half after we corrected our mistakes," Lokomotiv coach Jose Couceiro said.

"To be honest, I was expecting more after the first half," he said. "When you start losing the ball in your own half it's much harder to defend. ... In the return match we will aim for a big win."

Lokomotiv were comprehensively outplayed in a first half blighted by heavy snow, but the advantage swung the other way when the weather let up in the second half.

The visitors started the brighter, with Fernando Llorente glancing a free header wide from six yards out.

Susaeta thumped a volley straight at Guilherme in the Lokomotiv goal, before the hosts carved out their first chance.

Caicedo ducked past a defender but skewed wide when clear through on goal.

Muniain struck a powerful near-post shot that Guilherme tipped behind, and center-back Fernando Amorebiete headed over from the resulting corner.

On the half hour, Glushakov just failed to connect with a cross in front of an open goal after goalkeeper Gorka Iraizoz fumbled a shot from Dmitry Tarasov.

Guilherme held onto a powerful drive from Oscar de Marcos, before Lokomotiv striker Maicon hit straight at Iraizoz after a center from Caicedo.

Lokomotiv came out with renewed vigor in the second half, needing only five minutes to put together a clear chance for holding midfielder Alberto Zapater, but the Spaniard drove his shot from 15 yards right at Iraizoz.

After Glushakov made it 1-1, he forced Iraizoz into a fingertip save with a stinging long-range drive.

Bouyed by the equalizer, Lokomotiv turned the screw. Maicon drove over before the hosts took the lead.

After scoring Lokomotiv's second, Caicedo proved harder and harder for the visitors to keep at bay.

He created an opening for Dmitry Tarasov with a series of feints, but the Russian slammed the ball just over from the edge of the area.

On 79 minutes Maicon nearly made it three, thumping a low drive just wide after cutting in from the left.

Soon after, Renat Yanbaev beat the offside trap, cut back inside the defensive line and curled an effort toward the far post that Iraizoz was equal to.

Lokomotiv were almost caught out on the counterattack three minutes from time, with Guilherme forced into a reaction double save. He got a leg in the way of Llorente's close-range side-footer, before tipping over an overhead kick from Muniain.