Russian Bandy Team to Rebuild After Loss at Worlds Final 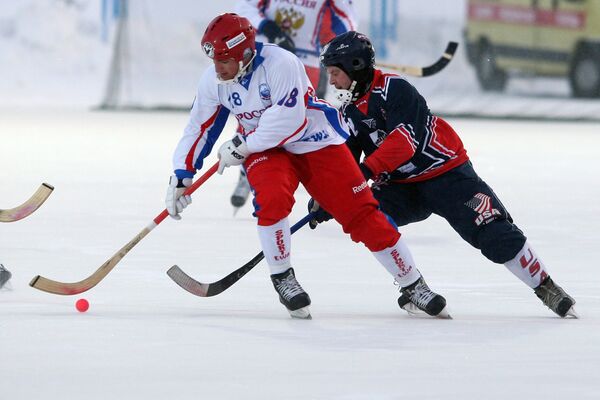 The Russian bandy team will be rebuilt after losing the world championship title in a narrow 5-4 defeat to perennial rivals Sweden, Boris Skrylnik, head of the Russian and world governing bodies, said Monday.

Russia had chances to win its sixth world title since the fall of the Soviet Union when it reached halftime at 2-2 on Sunday, but Sweden took control shortly after halftime and hung on for victory.

The result came as a shock after Russia earlier beat Sweden 6-2 in the group stage of the tournament, which was played in Almaty, Kazakhstan. This was the 32th edition of the world championship in bandy, which resembles ice hockey played with a ball.

Skrylnik had already thought about a "complete rejuvenation of the national team" before the tournament, but that the final loss made it a "more serious task," he told RIA Novosti.

"Let’s suppose that we lose [games] at the start [of this process], but we need to start this work so that we can play powerfully enough in two or three years’ time."

He added that better facilities were key to Russia’s future in the sport, pointing out that far fewer Russian clubs had their own ice rinks than their Swedish counterparts.

“There’s one very important problem, the lack of stadiums. In order to nurture new players we need to create quality facilities for their training.”

“I am not inclined to blame the coach. For its part, the federation did everything possible, made every effort necessary, including financially, to prepare the team.

“But you can’t pin everything on the trainer. If we’re talking about the interests of the national team, then you need to be active and show initiative on this issue, but not hide in the corner criticizing everyone around you.”

Skrylnik added that he had spoken to Firsov after the final. “I dropped into the locker room to support the lads and thank them. It’s useless to shout slogans in these situations. No one in the national team was deliberately trying to lose.”

Russia has historically dominated bandy, and the Soviet Union won the first 11 titles in a row. Sweden have racked up 11 world titles since their first triumph in 1981, and are Russia’s main rivals.