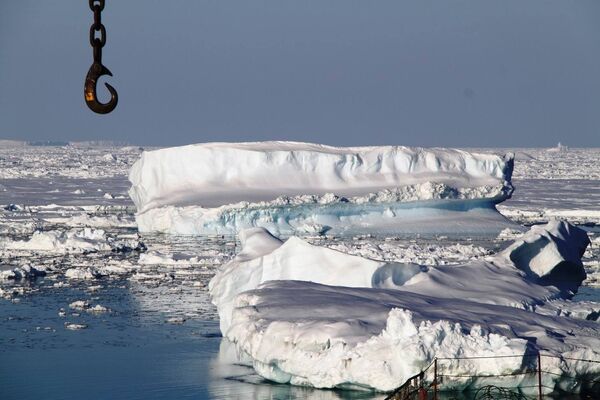 After decades of drilling , Russian scientists have finally managed to pierce through Antarctica’s ice sheet to reveal the secrets of a unique sub-glacial lake, Vostok, that has been sealed there for the past 20 million years, a scientific source said on Monday.

After decades of drilling , Russian scientists have finally managed to pierce through Antarctica’s ice sheet to reveal the secrets of a unique sub-glacial lake, Vostok, that has been sealed there for the past 20 million years, a scientific source said on Monday.

“Yesterday, our scientists stopped drilling at the depth of 3,768 meters and reached the surface of the sub-glacial lake,” the source said.

Explorers hope Lake Vostok, which is the largest of Antarctica's buried network of icebound lakes and also one of the largest lakes in the world, could reveal new forms of life and show how life evolved before the ice age.

The discovery of the hidden lakes of Antarctica in the 1990s sparked much enthusiasm among scientists all over the world. Some think the ice cap above and at the edges have created a hydrostatic seal with the surface that has prevented lake water from escaping or anything else from getting inside.

Lake Vostok could also offer a glimpse of what conditions exist for life in similar extreme conditions on Mars and Jupiter’s moon, Europa, according to RedOrbit scientific news portal.

Explorers from the United States and Britain are following the trail of their Russia’s colleagues with their own missions to probe other hidden Arctic lakes, which are among the last of the world’s hidden and unexplored areas.

With the current events happening at Lake Vostok, an old theory saying that German Nazis may have built a secret base there as early as the 1930s, has resurfaced.

It is thought that towards the end of the Second World War, the Nazis moved to the South Pole and started constructing a base at Lake Vostok. In 1943, Grand Admiral  Karl Dönitz was quoted saying “Germany's submarine fleet is proud that it created an unassailable fortress for the Fuehrer on the other end of the world,” in Antarctica.

According to German naval archives, months after Germany surrendered to the Allies in April, 1945, the German submarine U-530 arrived at the South Pole from the Port of Kiel. Crewmembers constructed an ice cave and supposedly stored several boxes of relics from the Third Reich, including Hitler’s secret files.

It is also rumored that later the submarine U-977 delivered the remains of Adolf Hitler and Eva Braun to Antarctica for DNA cloning purposes.

The subs then entered the Argentinean port of Mar-del-Plata and surrendered to authorities.