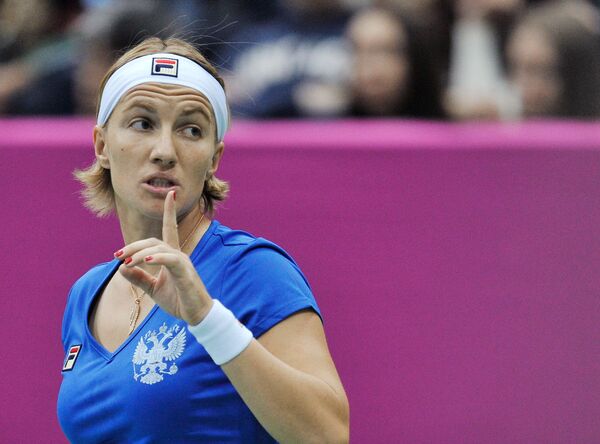 Russia completed a 3-2 victory over Spain in the Fed Cup on Sunday to set up a sixth-straight semifinal appearance.

Russia completed a 3-2 victory over Spain in the Fed Cup on Sunday to set up a sixth-straight semifinal appearance.

Svetlana Kuznetsova won the tie's crucial match on Sunday, beating Silvia Soler-Espinosa 6-2, 4-6, 6-3 to give the hosts an insurmountable 3-1 lead.

“Everything turned out difficult because of our mistakes, and because the Spanish team played really well,” Kuznetsova said.

Spain captain Arantxa Sanchez Vicario, making her debut on the bench, said she was satisfied with her team's effort.

“I’m really happy with my team. We even had chances to win this match. The experience of a top player like Kuznetsova made the difference.”

Russia, which has not lost to Spain since the Soviet Union fell, had looked comfortable overnight after Maria Sharapova, the Australian Open finalist, beat Soler-Espinosa in the opening match on Saturday and Kuznetsova overcame Carla Suarez Navarro.

But the Spaniards seized the initiative Sunday when Nadia Petrova was announced as a late replacement for Sharapova, who had reportedly come down with a cold.

An out-of-practice Petrova was trounced 6-0, 6-2, by Suarez Navarro to set up a nervy finish that required all of double-grand-slam-winning Kuznetsova's experience to pull through.

The Spanish pair of Nuria Llagostera Vives and Arantxa Parra-Santonja gained a consolation point for Spain in the final dead rubber when Kuznetsova and Petrova conceded after Spain took the first set 6-3.

By playing in the Fed Cup this year, Sharapova, who lost last month's Melbourne final to Belarusian Victoria Azarenka, has now qualified for a place on the Russian team for the London Olympics.

The Spain team featuring Arantxa Sanchez Vicario won five Fed Cup titles in eight years in the 1990s, and has never won the competition without her.

Russia has made the semifinals in each of the last five years, and the last team to stop it was Belgium in the 2006 quarterfinal. The Belgians were playing Serbia for the right to meet the Russians in Moscow in April.

Russia, beaten by the Czechs in last year's final, had not lost a rubber against Spain in their two previous Fed Cup ties, including the 2008 final, which Russia won 4-0 in Madrid. Kuznetsova, Makarova, Llagostera Vives and Suarez Navarro all played in that match.