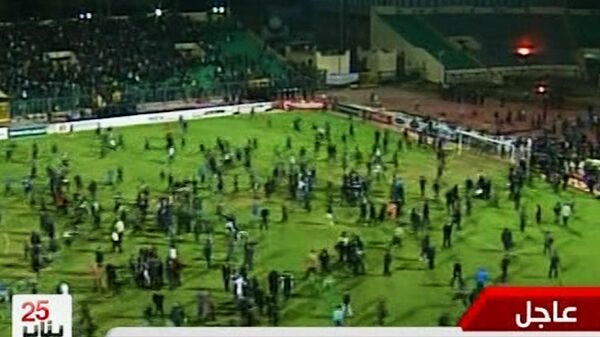 © RIA Novosti
Subscribe
At least 73 people were killed and up to a thousand injured following clashes and a stampede at a football stadium in the Egyptian city of Port Said on Wednesday night.

At least 73 people were killed and up to a thousand injured following clashes and a stampede at a football stadium in the Egyptian city of Port Said on Wednesday night.

Numerous fans rushed to the field after their home team from Port Said, Al-Masry, defeated Al-Ahly, one of Egypt’s top clubs from Cairo, 3-1. They first clashed with rival fans of the Cairo-based club and then attacked the players and coaching staff from Al-Ahly. The attack resulted in a stampede at the stadium, which was attended by some 40,000 people that night.

A spokesman for the country’s Health Ministry said most of the deaths were caused by injuries sustained in the stampede, concussions and deep cuts to the heads.

Another football game between Al-Ismaili and Zamalek teams in Cairo was called off after the news about the melee in Port Said broke out. Cairo fans angered by the violence in Port Said set the stadium on fire. National television reported that firefighters extinguished the blaze and no one was hurt.

The Egyptian Football Association has ordered to postpone indefinitely all matches of the country’s championship and the parliament has called for an emergency session on Thursday.

The Supreme Council of the Armed Forces (SCAF), which currently holds power in the country, dismissed the governor of the Port Said Province and the head of the province’s security department.

Egypt’s state television appealed to all Egyptians to help in donating blood for the injured people in Port Said and the military allocated two aircraft for transporting those with serious injuries to hospitals in Cairo.

FIFA President Joseph Blatter called the tragedy in Port Said “a black day for football” saying that “such a catastrophic situation is unimaginable and should not happen.”

“I am very shocked and saddened to learn this evening that a large number of football supporters have died or been injured following a match in Port Said, Egypt,” he said in a statement.

The violence in Port Said is the deadliest in football after 1996 events in Guatemala City, when some 80 people were killed and 180 others injured in a stampede at a stadium before a World Cup qualifier between Guatemala and Costa Rica.