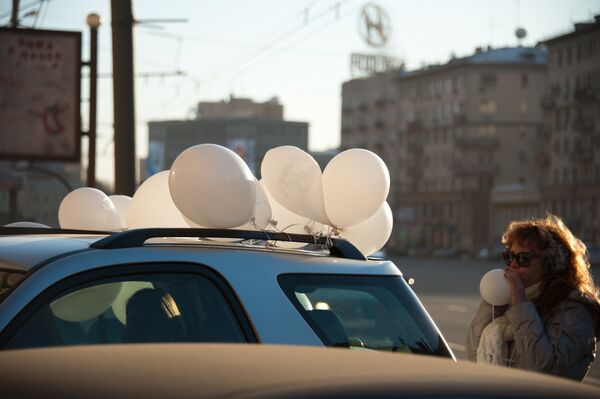 Hundreds of cars flying white ribbons - a symbol of Russia's protest movement - drove around a major Moscow thoroughfare on Sunday to demand a fair presidential vote in March.

Hundreds of cars flying white ribbons - a symbol of Russia's protest movement - drove around a major Moscow thoroughfare on Sunday to demand a fair presidential vote in March.

“Nobody has forgotten the December 4 [parliamentary] elections and people are ready to stand their ground,” Shkumatov told RIA Novosti.

Sunday's action was designed to maintain momentum ahead of the next anti-government demonstration on February 4, one month before a crucial presidential poll that is widely predicted to bring Prime Minister Vladimir Putin back to his old job in the Kremlin.

Opposition leaders fear the March 4 vote may be rigged in Putin's favor.

Putin served two terms as president from 2000 to 2008 but was constitutionally barred from standing for a third consecutive term.

White balloons and anti-Putin banners were also attached to some of the vehicles which circled the 16-kilometer Garden Ring road in central Moscow on Sunday. One car had a Putin doll strapped to its hood, a RIA Novosti correspondent reported.

The opposition claim the authorities are now using the state machinery to boost support for the prime minister.

Over the past several weeks, Putin has enjoyed extra-positive coverage on Russia's state-dominated TV, including several documentaries promoting him as the country's "savior" during the economic downturn in the 2000s. He has also refused to take part in TV debates ahead of the March vote - his spokesman said they would "impede his ability to duly carry out his duties."

There have also been reports in the liberal media of state employees being coerced to cast their votes for Putin, or else face the sack.

Another motorist protest, this time nationwide, is planned for February 19.