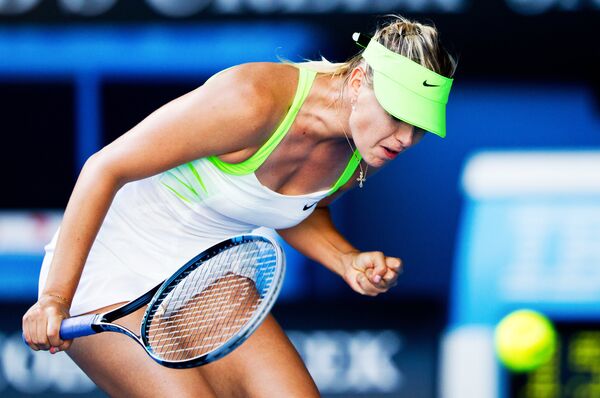 After Sharapova netted the last point with a tameness that summed up her evening, Azarenka, the new world No. 1, fell to her knees and held her hands cupped open, looking skyward in disbelief at her 6-3, 6-0 win.

"You guys made me believe in myself and I can finally raise this trophy," a teary Azarenka told the crowd.

"I've had an amazing month in Australia, it's a dream come true."

Sharapova, the 2008 champion, was philosophical in defeat.

"I've had tough losses, and this was another one, but I will be back."

Turning to her opponent, Sharapova said: "You've earned this title, you've worked so hard for it over the years. ... Cherish it for as long as you can."

Sharapova broke Azarenka in the first game of the match and consolidated on serve, but the Belarusian stormed back to win five of the next six games and take the set comfortably.

Azarenka never let Sharapova settle into her booming baseline game, hitting so deep that the Russian was frequently forced to hit compromised returns off her toes.

The Belarusian, who has beaten Sharapova in their last two hard court meetings, mercilessly pressed home her advantage as the Russian crumbled under the pressure.

She took the last nine games straight as Sharapova hit too often into the net and tramlines, completing an unlikely drubbing in 82 minutes.

Sharapova's evening was summed up in the final game, where she earned a break point with a fortiutous net cord and threw away the chance with a wide backhand the next shot.

For the Russian, who now returns to her homeland for next week's Fed Cup tie against Spain, it was a bitter moment after her decision to skip three months' worth of tournaments to rest an ankle injury for the Melbourne slam looked to have paid off.

On her run to the final, it was only at round four that she dropped more than three games, ousting German Sabine Lisicki in three sets. She stopped compatriot Ekaterina Makarova's fine run at the quarterfinal stage, before downing Petra Kvitova in the semis.

Kvitova had beaten Sharapova in the 2011 Wimbledon final.

It tops off an impressive run for Azarenka, who had much the tougher route the final. She beat defending champion Kim Clijsters in the seminfinal and Poland's eighth seed Agnieszka Radwanska in the quarters.