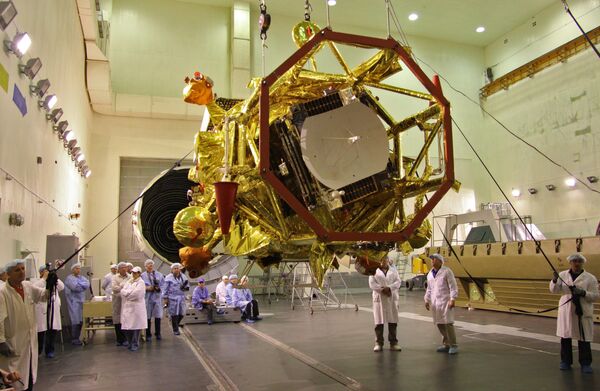 © RIA Novosti
/
Go to the mediabank
Subscribe
International
India
Africa
Phobos-Grunt, a failed Russian sample mission to a Martian moon, was launched despite risks of which Russian scientists were well aware

Phobos-Grunt, a failed Russian sample mission to a Martian moon, was launched despite risks of which Russian scientists were well aware, the head of the Russian space agency said on Tuesday.

Phobos-Grunt, Russia's most ambitious planetary mission in decades, was launched on November 9 but it was lost due to propulsion failure and stuck in the low-earth orbit. It is expected to fall back to Earth on January 15, presumably in Afghanistan.

Vladimir Popovkin, the head of Roscosmos, said in an interview with the Izvestia daily that even if Russia hadn't lost the mission, it would still lose five billion rubles ($157 million).

“We were hostages to previously made decisions, we had commitments to the European Space Agancy, which provided equipment, and to our Chinese colleagues as we undertook the task of delivering their satellite to Mars onboard Phobos-Grunt,” Popovkin said.

It took too long to build the spacecraft, he said, and the life span of many parts was about to expire. The project officially began in 1999.

“I don’t want to make any accusations, but today there is powerful equipment to influence spacecrafts, and the possibility of their use should not be ruled out,” he said.