Tens of thousands rally in new election protest in Russia 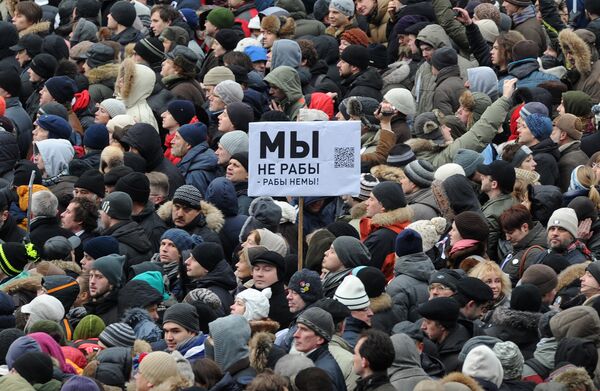 Tens of thousands of protesters rallied on downtown Moscow’s Sakharov Avenue on Saturday to demand a rerun of parliamentary elections they claimed had been rigged, as well as liberal reforms in Russia, turning the temperature up on Vladimir Putin and his plans to return to the Kremlin.

Tens of thousands of protesters rallied on downtown Moscow’s Sakharov Avenue on Saturday to demand a rerun of parliamentary elections they claimed had been rigged, as well as liberal reforms in Russia, turning the temperature up on Vladimir Putin and his plans to return to the Kremlin.

Moscow police put the number of protesters within the space authorized for the rally at about 30,000, saying police officers ensured public order and security at the rally “in full.” Opposition figures said 120,000 came to protest.

But geodesic engineer Nikolai Pomeshchenko, asked by RIA Novosti to use his professional equipment to count the number of protesters at Saturday’s rally, said some 56,000 people attended the event.

As the demonstration swelled, the Kremlin moved to respond in real time, with a spokeswoman for President Dmitry Medvedev announcing that reforms to ease restrictions on political parties could be enacted quickly.

Over 700 reporters covered yesterday’s protests, which, together with the December 5-7 and December 10 protests following the parliamentary elections, are believed by some to be the largest in Russia’s history in the past two decades.

The ruling United Russia party, led by Prime Minister Vladimir Putin, won the December 4 State Duma elections, gaining nearly 50 percent, a sharp drop from over 64 percent it enjoyed at the previous election in 2007.

Independent observers and critics said the election to the lower house had been slanted in favor of United Russia and cited incidents of apparent ballot stuffing. Thousands took to the streets to protest the results. The authorities denied that major irregularities occurred, but admitted minor violations, pledging that they will all be investigated.

The atmosphere on Sakharov Avenue, named for the Nobel Peace Prize-winning late Soviet physicist and dissident Andrei Sakharov, was calm but determined as citizens with a wide range of political views turned out to express their opposition to the December 4 polls and Russia’s political status quo in general.

“Our votes were stolen!” Alexei Navalny, an anti-corruption whistleblower and activist, who has become a driving force in the Russian protest movement, shouted to the crowd from a massive stage installed at one end of the avenue.

“We came here to get them back! Give them back right now!” Navalny said to cheers from the crowd.

Boris Nemtsov, a long-time Putin critic and former deputy prime minister, also addressed the demonstrators, appealing to them to go to the polls in presidential elections scheduled for next March 4 “but not to cast one single vote for Putin.”

As Nemtsov, one of the leaders of the country’s liberal opposition, talked, he got booed by groups of Russian nationalists and Communists who gathered separately in the crowd.

Many participants of the rally held white balloons and wore white ribbons in lapels as symbols of the protest. In a televised call-in show last week, Putin said that he took these ribbons for condoms when he watched television reports from the previous protest rallies.

Navalny, Nemtsov and other opposition activists were joined on the stage by a diverse group of protesters including novelist Boris Akunin. Russian rock musician Yury Shevchuk and TV anchor Leonid Parfyonov spoke to those who gathered in video addresses.

But while Nemtsov and other veteran opposition activists were present on the stage, many in the crowd made clear they had taken to the street not to support these longtime Putin critics but to express their own views on the state of politics in Russia.

“We have a fine Constitution and it gives every citizen the legal right to public assembly and to expression of our opinions,” said one demonstrator in a video report from the rally.

The demonstrators, a diverse coalition of private citizens, political and social movements and internet activists, voiced a variety of demands including a rerun of the December 4 elections and the sacking of the country’s top election official, Vladimir Churov.

Medvedev and Putin have vowed to investigate and punish election violators but have given no indication that they are willing to repeat the Duma vote, as demanded by protesters.

Former finance minister Alexei Kudrin addressed the rally, calling on its participants to pursue their demands for political change in an organized way and stay away from "revolution".

He called for the creation of a working group to work out proposals and enter dialogue with the authorities. In his opinion, new rallies are only required if the demands of Saturday’s rally are not implemented.

When Kudrin spoke, booing was heard around him.

Kudrin, widely respected at home and abroad for his stewardship of Russia's economy for the past decade, resigned earlier this year after Putin accepted United Russia's nomination to run for president again and announced that he and Medvedev would switch jobs if he were reelected in the March 4 presidential election. Kudrin is Putin's longtime ally. They worked together at the St. Petersburg City Hall in the early 1990s. Putin said last week that he will “find a place” for Kudrin in his future government.

Kremlin spokeswoman Natalya Timakova meanwhile said that proposals put forth by Medvedev earlier to loosen restrictions on political parties could in theory be put into action with little delay.

“As soon as the bill goes to the Duma and the Federation Council, and we hope that will happen quickly, the president will sign it and parties will be able to register under new rules,” Timakova told journalists.

In a further build-up of pressure on the Kremlin to accommodate the demands of the protesters, the presidential council on human rights said on Friday that Churov, the Central Election Committee chief whose dismissal has been demanded by the demonstrators, should step down.

In a statement, the council said many reported election violations of many types made it necessary for members to “express distrust in the head of the Central Election Commission, Vladimir Churov, and ask him to resign because of a lack of confidence.”

Also on Friday, the national Izvestiya daily newspaper published an interview with the Kremlin’s chief domestic politics strategist, first deputy head of the presidential administration Vladislav Surkov, in which he hailed protesters as the “best part of our society who demand respect,” while calling the existing political system “stupid” and “corrupt.”

Protesters adopted a resolution calling for new and fair elections, open registration for all opposition parties by February 2012, the immediate release of all political activists detained during protests and the annulment of the December 4 election results they claim were rigged.

Other demands included the resignation of Churov, the prosecution of all those involved in ballot stuffing and a vote against Putin, who is widely believed to be able to win the March 4 presidential elections in Russia to return to the presidential post he held in 2000-2008.

All opposition parties, not only the so-called ‘establishment opposition’, must be registered and allowed to run to ensure genuinely free and fair elections, the resolution said.

Dozens of protesters were detained across Russia, but apparenty none in Moscow. Protests took place in many Russian cities, drawing from several dozen to several thousand people.

Ten activists from the Other Russia opposition group were detained in St. Petersburg, Russia’s second largest city, 22 protesters were held in Nizhny Novgorod, in central Russia and about 20 were detained in the Siberian city of Barnaul.

Police were generally more lenient, in some cases allowing even unauthorized protests to go ahead with no reports of police brutality.