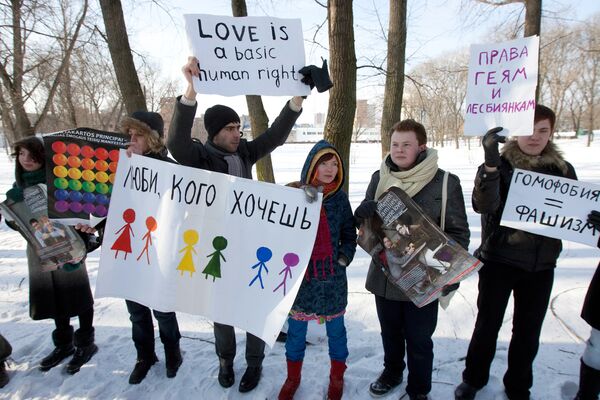 © RIA Novosti . Andrei Alexandrov
/
Go to the photo bank
Subscribe
St. Petersburg’s city legislature has postponed debate on a bill imposing fines for the promotion of homosexuality after lawmakers failed to agree on its “legal definitions.”

St. Petersburg’s city legislature has postponed debate on a bill imposing fines for the promotion of homosexuality after lawmakers failed to agree on its “legal definitions.”

“We have decided to double-check all legal definitions related to this bill,” its author Vilatly Milonov, a deputy with the ruling United Russia party, told reporters on Wednesday.

Lawmakers were also at odds over the amount of the fines that would have to be paid, the city assembly's speaker Vadim Tyulpanov said.

The bill, passed nearly unanimously in the first of the three readings needed to write it into law last Wednesday, effectively outlaws any gay pride events.

If adopted, it would allow authorities to impose fines of up to 50,000 rubles ($1,600) for “public activities promoting sodomy, lesbianism, bisexuality and transgender identity” as well as pedophilia among minors.

While the authorities argue the measures are necessary to safeguard children from the “rising popularity of sexual deviations,” rights groups have warned of the slide towards legitimizing fascism.

“The very concept of this bill is illegal, it cannot be defined to conform with legal norms,” Igor Kochetkov, head of the St. Petersburg LGBT group Coming Out, told RIA Novosti.

“The notion that LGBT rights activists are somehow converting Russia’s youth through ‘propaganda’ would be laughable, if the potential effects of this new law weren’t so dangerous and wide-reaching,” Nicola Duckworth, the group’s Europe and Central Asia Program Director, said in a statement last week.

Activists have also resented being slumped together with child sex offenders.

“Sexual orientation is an inborn quality, you cannot change it and therefore don’t need to promote it, it’s not a political position,” she said.

“Homosexuality is not contagious.”