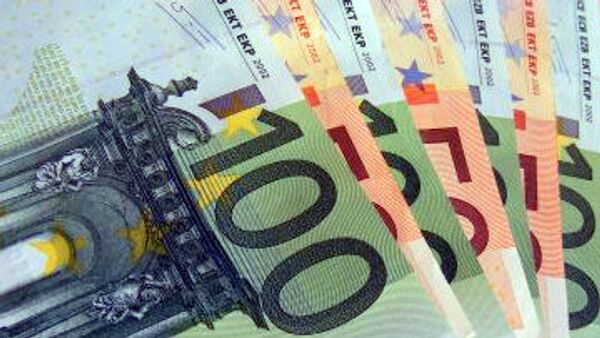 The euro fell against the U.S. dollar on Wednesday and European markets slumped with it, amid lingering uncertainties over who will lead a new Greek government and Italian bond yields entering dangerous territory.

The euro fell against the U.S. dollar on Wednesday and European markets slumped with it, amid lingering uncertainties over who will lead a new Greek government and Italian bond yields surging above a dangerous level.

The yield on Italy’s benchmark 10-year sovereign bonds rose to a record 7.48 percent on Wednesday, above the 7 percent level that triggered bailout requests from Portugal, Ireland and Greece.

At that level, debt repayment is likely to exceed the level at which Italy can afford to repay it. Italy's state debt stands at about 1.9 trillion euros ($2.6 trillion). Many analysts suspect that Italy's debt problem is simply too big to bail out.

The euro was supported on Tuesday by a statement from Italy's Prime Minister Silvio Berlusconi about his intention to resign, but by Wednesday, investors were doubtful of the ability of a new prime minister to resolve Italy's economic problems, and uncertainty remains about when exactly Berlusconi will go.

IMF head Christine Lagarde warned of a decade of economic turmoil ahead if the situation was not resolved quickly.

"Our sense is that if we do not act boldly and if we do not act together, the economy around the world runs the risk of downward spiral of uncertainty, financial instability and potential collapse of global demand," she said.

"The positive external background and global oil prices that have been on the upside trend supported the Russian currency while the European currency remained under pressure from Italy and Greece's debt problems," said BroCo brokerage senior analyst Alexei Matrosov. "The rotation in the political elite of Greece and Italy is keeping investors nervous, prompting them to invest in safer assets to live through the period of uncertainty," he added.

Papandreou said earlier this week that he would go in order to help form a coalition government from his socialist PASOK party and the center-right New Democracy party.

The new Greek government will have to approve the bailout deal agreed with the EU and then conduct parliamentary elections, provisionally set for February 2012.

Without loans from the EU and IMF, Greece may default on its 360 billion euro ($495 billion) debt in the coming weeks.