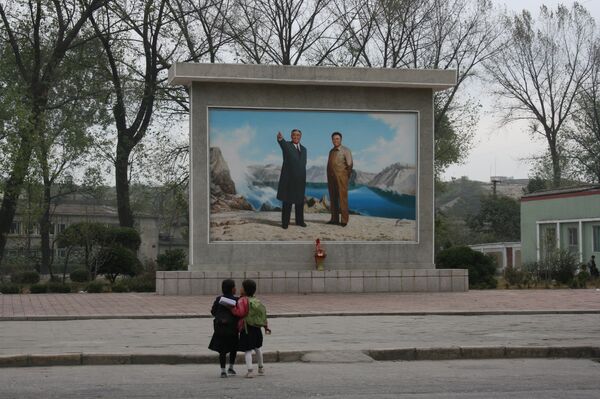 © RIA Novosti . Marc Bennetts
Subscribe
International
India
Africa
North Korea’s Eternal President Kim il-Sung received so many gifts during his lifetime that it would take a year and a half to see them all, our guide told us as we examined his presents from Russia. She would, she went on, be more than happy to spend the next 18 months checking them out with us, but feared we would be unable to spare the time. She was right.

North Korea’s Eternal President Kim il-Sung received so many gifts during his lifetime that it would take a year and a half to see them all, our guide told us as we examined his presents from Russia. She would, she went on, be more than happy to spend the next 18 months checking them out with us, but feared we would be unable to spare the time. She was right.

Still, at least we got to see quite a few of the gifts on display at the International Friendship Exhibition, which consists of two grand buildings set among the pleasant scenery of Myohyang-san mountain. The first contains Kim il-Sung’s presents, while the second is home to current Dear Leader Kim Jong-il’s goodies.

One of my favorites was a stuffed crocodile holding a drinks tray that was presented to Kim il-Sung by Nicaragua’s Sandinista rulers in the 1980s. “The crocodile is a creature that will not bow to man,” our guide told us. “But this crocodile serves Kim il-Sung.”

Most of the more spectacular gifts were from former communist or otherwise authoritarian states. There were train carriages from Stalin (“a great friend to the Korean people”) and Mao, as well as a range of expensive looking chess boards and other decorations from Libya’s Muammar Gaddafi. Former Romanian dictator Nicolae Ceausescu had been generous enough to gift Kim il-Sung a stuffed bear’s head.

Gifts from Western politicians and diplomats weren’t quite as extravagant – U.S. Secretary of State Madeleine Albright had given Kim Jong-il a basketball signed by Michael Jordan during her 2000 visit, while former U.S. President Jimmy Carter had handed over an ashtray. Still, Koreans do smoke a lot.

One of the most bizarre sections was devoted to presents given to Kim il-Sung two years after his death. A Japanese delegation had gifted the late leader – or the Eternal Sun of Mankind as he is known in North Korea – with a Minolta camera. It didn’t look as if it had been used much. There was also a throne from Nigeria and some TVs from some South Korean communists. Our guides didn’t seem to think there was anything odd in this.

The vast majority of the North Korean workers and students being shown around the treasure-houses were undoubtedly unfamiliar with the routine diplomatic exchange of gifts, and it really must have seemed to them as if their leaders are universally admired. Which, I guess, is the whole point of the place.

Before we left, we were ushered into a room containing “a waxwork figure of Eternal President Kim il-Sung presented by the Chinese Communist Party two years after his passing.” I was instructed to zip my jacket up.

“Foreigners who visit this room say ‘now we understand what it was like to meet Kim il-Sung, the eternal sun of mankind.’” “All of them?” I asked. “Yes, all of them,” the guide replied. At least I knew what was expected of me.

Kim il-Sung’s waxwork figure smiled at me from the far end of the room. Bird song played over the speakers. We walked closer and lined up at a respectable distance. Then the Koreans bowed. I managed not to, for which I got a few disapproving glances. But nothing was said.

Although North Korea is an atheist state, worship of the late Kim il-Sung and Kim Jong-il has effectively replaced religion. “Famous U.S. preacher Billy Graham visited us in the 1990s,” our guide told us. “And he said ‘I bow to no man, only to God. But before the great leader Kim il-Sung I cannot but bow my head.” I later found out that Graham had expressed a certain admiration for Kim, but could find no reference to him bowing.

Kim il-Sung’s “passing” in 1994 was met by months of mourning across North Korea, with reports of numerous deaths from excessive weeping. Three years later, the North Koreans changed their calendar to make year zero the birth of Kim il-Sung. As a result, it is now year 100 in North Korea. Massive celebrations are planned for next year – the centenary of Kim’s birth.

In 1998, in what was seen as a shift towards the deification of Kim il-Sung, a new constitution was adopted that emphasized his “immortality.”

During my entire week in North Korea, the only statues of real people I saw were of Kim il-Sung or Kim Jung-il.

Every single North Korean, from the age of 14 years onwards, wears a loyalty badge to one of the Kims. “They are not compulsory,” a guide told us. “We just all want to wear them.”

At concerts, shows and even on the Air Koryo plane from Beijing, the greatness of the Kims is stressed over and over again. The massive Airang Games, a unique extravaganza or music, dance and circus was, our guides said “created and inspired by Kim Jong-il, a master of all spheres.”

A children’s concert we attended at an afterschool study centre for kids of the Pyongyang elite featured songs such as “Kim il-Sung danced with us” and "Kim il-Sung created our land.” Indeed, the liberation of the country from Japanese occupiers in 1945 is also attributed to Kim il-Sung, with no mention of the decisive role the Soviet Red Army played.

“Every success, every achievement, every victory, every scientific discovery, all knowledge, all wisdom, all happiness, all virtue, are held to issue directly from his leadership and inspiration,” wrote George Orwell of Big Brother in 1984, his classic novel of totalitarianism. He could just as well have been writing about either of the Kims.

Although I’d managed to avoid bowing to a waxwork figure at the palace of gifts, I’d had no choice but to lower my head at Kim il-Sung’s massive mausoleum. To get to the body, you have to take escalator after escalator before being ushered through a wind machine (to remove excess dust) and stand before the embalmed body of North Korea’s man-god. Bowing here is pretty much compulsory.

But a lot of Western tourists I saw during my visit were bowing at statues or paintings of Kim il-Sung even when no one was asking them to do so. The pressure to conform was so great that even Germans, Americans and other folk from the “decadent West” surrendered to it entirely after just a few days in the country. It’s not too surprising then that most North Koreans seem absolutely fanatical in their love for the Kims.

Later that day, we had the chance to interview “specialists on Juche,” the North Korean national ideology developed by Kim il-Sung from the 1950s onwards and summed up in his 1982  tome “On the Juche Idea.”

For those of you not up on Juche, the basic tenet is that “man is the master of everything and decides everything.” It also places great significance on the policy of self-reliance and self-sufficiency, an aspect that has been somewhat undermined by North Korea’s frequent requests for international food aid.

I had read through – just some – of Kim il-Sung’s writings on Juche, and was unable to grasp it. Whole pages were taken up with torturous repetitions and rephrasing of the “man decides everything” concept. It made my brain hurt to try but I sincerely tried to see beyond this self-evident - if not entirely accurate - phrase. And failed. Was that all there was to it?

The experts, sitting under the ubiquitous portraits of the two Kims, launched into an equally as long and convoluted explanation, drawn, it seemed, entirely from the writings of the Eternal Sun. Man they told me, is a talented and intelligent being who can create a better life for himself. But I still didn’t get it. Everyone knows that, surely? Why, even in Britain, the U.S. and – I dare say – in South Korea, it’s fairly common knowledge that the human race has been able to lift itself above the level of the beast. So why did Kim make such a big fuss about it?

The experts persevered for a bit, but they could see, I sensed, that I was a lost cause. Still, it was nice of them to try and explain things to me and we parted on amicable terms.

I went back to my hotel room and turned on the news. Kim il-Jong was visiting a factory and handing out “on-the-spot guidance.” I wasn’t sure, but he seemed to have been to the same factory three times in the last three days.

By the time my last day in North Korea rolled around, I was looking forward to leaving. I’d had enough of the Kims. I understand that Korean culture is very different from my own and that even South Koreans are capable of extreme devotion, manifested in their case by an intense form of corporate culture. (What's stranger - to worship Kim il-Sung as a god or devote your entire life to Samsung?)

But as my final hours in Pyongyang ticked down, there was something I really wanted to say to the North Koreans. “Ok,” I would tell them. “Kim il-Sung was the greatest person ever to have lived, the perfect human, blessed with talents in all spheres. And his son, Kim Jong-il, is just as amazing. A genius, in fact. But please, please, please, could you just stop going on about them for a few minutes or so…”