Belarus needs to reform economy to get IMF bailout - IMF 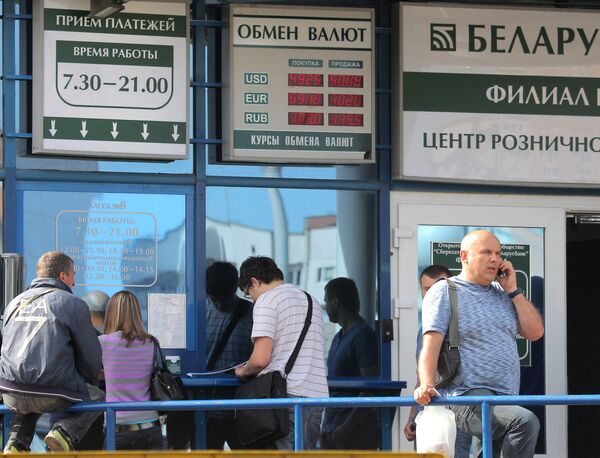 Belarus needs to show its commitment to market reforms and prove it with concrete steps to get a bailout from the International Monetary Fund, IMF Belarus mission chief Chris Jarvis said on Monday.

Belarus needs to show its commitment to market reforms and prove it with concrete steps to get a bailout from the International Monetary Fund, IMF Belarus mission chief Chris Jarvis said on Monday.

Minsk asked the IMF for help in June after it had to devalue its ruble pressurized by a large trade deficit, generous wage increases and loans granted by the government ahead last December's presidential election. But the IMF said the government had failed to present a sound economic program and sent a new mission to Minsk in October.

Jarvis said that Belarus' decision on Saturday to abandon a multiple exchange rate was an important step forward.

On Saturday, Belarusian Deputy Prime Minister Sergei Rumas said the country would unify two trading sessions: one at which the rate was set by supply and demand, and the other where the central bank actively intervened.

In the last two weeks, the Belarusian ruble lost 20 percent to 9,000 per dollar, and analysts expect that the new trading rules would push the ruble down to some 10,000 per dollar.

Jarvis also said that the IMF called on Belarusian authorities to cut inflation which was eating away at ordinary Belarusians' incomes and raised inflationary expectations, and to continue cutting state spending and increase interest rates above inflation.

He added that the ruble's 36 percent devaluation this spring had helped the government cut the current account deficit, but this advantage could be destroyed by inflation.

Belarus' printing presses have been working at full speed recently with the rate of money supply growth jumping 51.4 percent by September.

He also said that Belarusian authorities asked the IMF to provide $3 billion to $7 billion, but the concrete amount had not been discussed yet. He added it would be discussed during the next IMF mission visit to Belarus, if it took place.

In June, Minsk got the first $800 million tranche out of a $3 billion bailout from the anti-crisis fund of the EurAsEC, a post-Soviet economic bloc led by Russia.