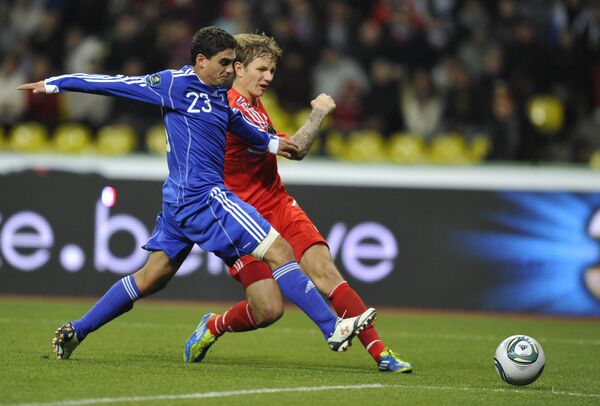 © RIA Novosti . Alexei Kudenko
/
Go to the photo bank
Subscribe
Russia emphatically secured passage to the finals of Euro 2012 as Group B winners on Tuesday with a 6-0 demolition of Andorra.

Russia emphatically secured passage to the finals of Euro 2012 as Group B winners on Tuesday with a 6-0 demolition of Andorra.

A draw would have sufficed after last Friday's crucial 1-0 win in Slovakia gave Russia a two-point cushion at the top of the group.

«I think we played a very strong competition in the 10 games, and really deserved to have the first place,» Russia coach Dick Advocaat said.

Russia steamrolled the part-timers from the tiny principality, who managed just one shot all night.

Alan Dzagoev opened the scoring in the 5th minute, driving home from 15 yards after a weak punch from Andorra goalkeeper  Jose Gomes.

Andrei Arshavin doubled the lead from a free kick from the left that went straight in despite Sergei Ignashevich being a hair's breadth away from connecting with a header.

The third came on the half-hour mark: Roman Pavlyuchenko collected the ball on the edge of the area, sidestepped a defender with consummate ease and slid a shot into the far corner.

Dzagoev's scored Russia's fourth and most spectacular a minute before half time, swiveling to fire in half volley from the edge of the area after Roman Shishkin's knockdown.

Andorra held out for 15 minutes of the second half before conceding a fifth, a bouncing header into the corner from Denis Glushakov.

The sixth came from Everton winger Diniyar Bilyaletdinov, collected the ball 25 yards out and fired a left-footed shot beyond Gomes and into the right-hand corner.

Russia carved out a dozen other excellent chances but ultimately fell a goal short of the national team's record 7-0 defeat of San Marino in 1995.

The qualification will help erase memories of the country's agonizing failure to make the 2010 World Cup finals in South Africa, losing the playoff to Slovenia 2-2 on the away goals rule.

Vasily Berezutsky had the ball in the first half, but the goal was ruled out for handball.

Sergio Moreno recorded Andorra's only shot on goal, sailing a long-range shot into the arms of the under-employed Vyacheslav Malafeev in the first half.