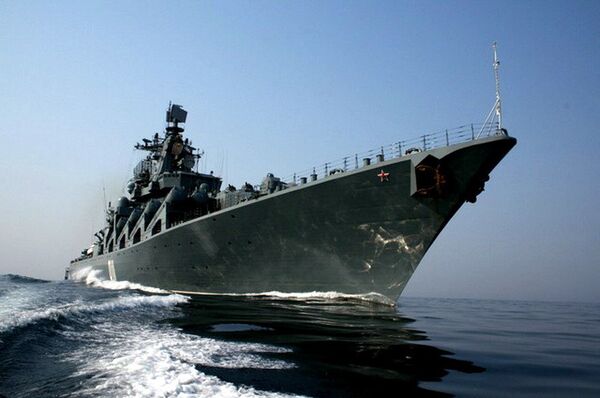 A Russian Pacific Fleet's task force led by the missile cruiser Varyag will arrive on Sunday to Japan on a five-day friendly visit, the fleet's spokesman said.

A Russian Pacific Fleet's task force led by the missile cruiser Varyag will arrive on Sunday to Japan on a five-day friendly visit, the fleet's spokesman said.

The task force, which also includes the Irkut tanker and a salvage tugboat, will arrive at the port of Maizuru during the first leg of its Pacific tour with visits to Japan, the United States and Canada.

"At the end of the visit to Maizuru the Russian task force will take part in a joint search and rescue exercise with Japan's Maritime Self-Defense Force," Capt. 1st Rank Roman Martov said.

After the visit to Japan, Varyag will set sail to U.S. Mariana Islands to hold the Pacific Eagle-2011 exercise with the U.S. Navy.

The third leg of the tour is a friendly visit to the port of Vancouver in Canada. The task force is expected to return home in the beginning of December.

The Varyag is a Slava class missile cruiser, designed as a surface strike ship with some anti-air and ASW capability. The sixteen SS-N-12 Sandbox nuclear-capable supersonic anti-ship missiles are mounted in four pairs on either side of the superstructure, giving the ship a distinctive appearance.

NATO experts had dubbed Russian combat ships of this class "the killer of aircraft carriers," as they can launch 1,000 kg of high-explosives or a tactical nuclear warhead to a range of 300 miles.

A task force led by Varyag, the flagship of the Pacific Fleet, paid a friendly visit to the United States in June last year.