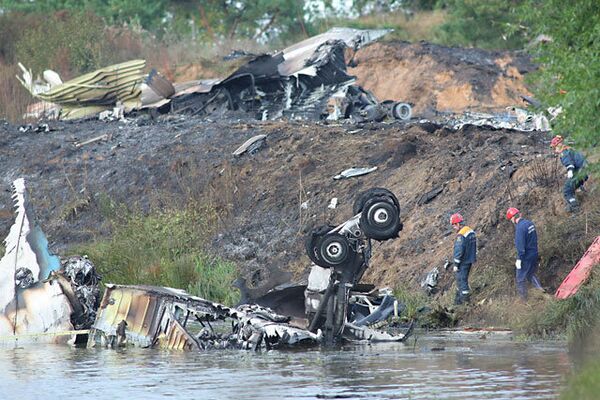 Two people survived the crash, investigators said. The cause of the accident has not yet been established.

The Yak-42 plane was carrying the team to Minsk, the Belarusian capital, for the start of the new Kontinental Hockey League (KHL). The side is coached by Canadian Brad McCrimmon, a former Detroit Red Wings assistant and features top players from Germany, Sweden, Slovakia and Czech Republic, as well as Russia.

The plane crashed moments after take-off from Yaroslavl airport at 4:00 p.m. Moscow time (noon GMT), bursting into flames as it hit the ground. Witnesses spoke of hearing two "loud bangs" before the accident.

"Passenger body parts were found in the Volga River, where part of the fuselage fell," a police source said.

President Dmitry Medvedev, who was due to take part in a political forum in Yaroslavl on Thursday, has expressed his condolences to the families of the victims. His press-secretary said Medvedev would visit the site of the crash.

"Deepest condolences to the loved ones of the Yaroslavl air crash victims, and to all Lokomotiv Yaroslavl fans," the Russian president wrote in his English-language Twitter account.

Russia has a poor aviation safety record. Medvedev has promised to take Soviet-era planes out of service from next year. The Yak-42 has been in service since 1980.

One of the survivors was Russian national side player Alexander Galimov. The other was a member of the crew, a club official said. Galimov is reported to have suffered burns on 80% of his body.

Lokomotiv has a number of former NHL stars on the books. The club's entire first team was on board the plane.

Lokomotiv Yaroslavl, founded in 1949 as the team of the Railways Ministry, is one of Russia’s leading hockey teams and came runner up in the nascent Kontinental Hockey League in 2008 and 2009. In 1997 it took the Russian Superleague title and won back-to-back championships in 2002 and 2003. It was one of the favorites for this year’s Kontinental Hockey League.

The season-opening game between reigning champion Salavat Yulaev and Atlant in the city of Ufa was cancelled as news of the disaster broke.