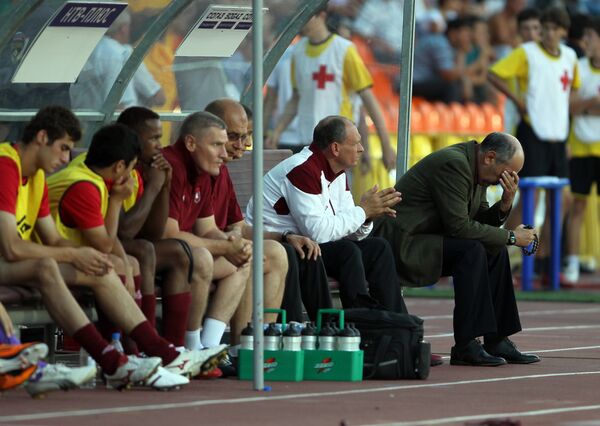 © RIA Novosti . Роман Кручинин
/
Go to the photo bank
Subscribe
Lyon fought back from a goal down to beat Rubin Kazan 3-1 in the first leg of their Champions League playoff in France on Tuesday, with striker Bafetimbi Gomis scoring two goals.

Lyon fought back from a goal down to beat Rubin Kazan 3-1 in the first leg of their Champions League playoff in France on Tuesday, with striker Bafetimbi Gomis scoring two goals.

Lyon's Jimmy Briand claimed the third in a result gives the hosts a big advantage heading into the second leg in Kazan next week, when one team will earn passage to the Champions League group stage.

Rubin striker Vladimir Dyadyun had stunned the home crowd in the 3rd minute, beating Lyon defender Dejan Lovren to a corner and sending a volley inside the far post.

Gomis canceled that out inside 10 minutes, breaking free in the center to meet an early cross from the left and cushioning a precision volley into the corner of the net from the edge of the penalty area.

Gomis put Lyon ahead five minutes before the break, his cross from the left of the penalty area deflecting off Rubin defender Salvatore Bochetti and inside goalkeeper Sergei Ryzhikov's near post.

Briand flicked in a near-post header from a corner to make it 3-1 in the 71st minute.

The 25-year-old Frenchman Gomis had two opportunities to record a hat-trick but half-volleyed one over the bar and scuffed the other straight at Ryzhikov.

In an open and entertaining match, both teams survived goalmouth scrambles and spurned a host of chances.

Michel Bastos had a header off the line after on 23 minutes, and Ryzhikov retreated to clear an attempted lob from Briand shortly before the break.

Rubin substitute Aleksei Medvedev met a cross from the right too heavily at the start of the second half, powering a shot over from barely four yards out.

Rubin midfielder Gokdeniz Karadeniz unleashed a stinging long-range strike from 30 yards that forced Hugo Llodris into a flying, fingertip save soon after.

As Rubin tired, Lyon sprang Rubin's offside trap and went three-on-one, but defender Vitaly Kaleshin made a dramatic lunging block to deflect Bastos' attempt to round off the move.

Karadeniz was clear through five minutes from time but Llodris rushed out to block the Turk's chip.