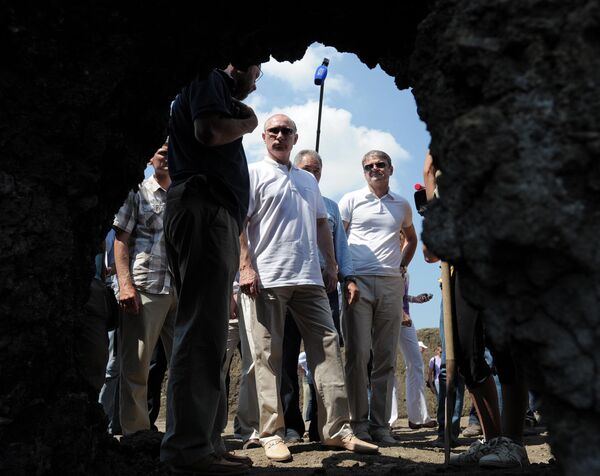 Putin made the dive to publicize archeological restoration work on the submerged part of the ancient Greek city of Phanagoria.

Putin came up to the surface after diving to the bottom of the Taman Bay, in the Kerch Strait with two ancient slightly damaged ceramic containers that he had found and brought up.

He added that he had found them at a depth of about two meters.

Putin indicated that he would discuss the prospects of opening a museum at the site.

"Mankind will be interested to learn that we have such riches," Putin said. "I believe people will come from all over the world."

About 100 billion rubles ($3.5 billion) will be earmarked for the purpose between 2012 and 2018 under a federal inbound tourism development program, Putin said, adding that inbound tourism was expected to rise 400%.

Putin was also shown around a nearby excavation site, starting with the Boyur Gora man-made mound dating back to the 4th century BC. The mound is 10-11 meters high and about 100 meters in diameter.

"It is a unique architectural structure - an earth building," Kuznetsov said.

"Can I take it?" he asked the archeologists. "It might be useful in my household."

Phanagoria was once the largest Greek colony on the Taman Peninsula, spreading on two plateaus along the Asian shore of the Cimmerian Bosporus. The location of Phanagoria was determined in the 18th century, when marble statue bases with dedications to Aphrodite were discovered there.