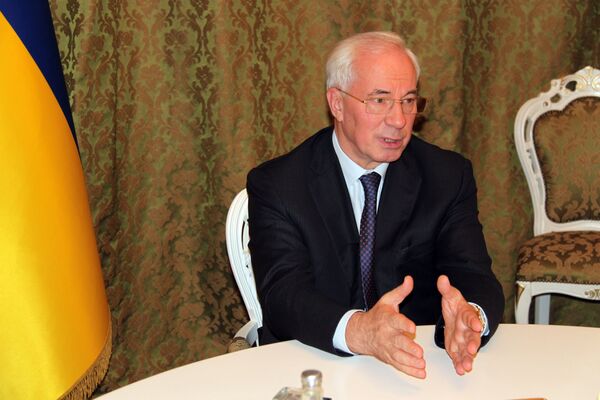 Kiev hopes that the details of the current deal with Moscow on the Russian natural gas deliveries will be revised and finalized in July.

Kiev hopes that the details of the current deal with Moscow on the Russian natural gas deliveries will be revised and finalized in July, Ukrainian Prime Minister Mykola Azarov said.

Russia's natural gas price for Ukraine currently equals $295.6 per 1,000 cu m and is expected to rise to $350 in the third quarter and to $400 and more in the fourth quarter of 2011. Kiev is not satisfied with the prices and insists that the deal should be revised.

"We would like our [Russian] partners to understand and we insist on this during our talks that the contract, which does not suit one of the sides and does not suit categorically, would not work for long," Azarov said in an interview with Ukrainian 1+1 television channel late on Monday night.

Ukraine receives a 30 percent discount on Russian gas deliveries compared to European supply prices in exchange for permission for the Russian Black Sea fleet to berth in bases in the Crimea for 25 years after 2017, when the previous base agreement expires.

Kiev has been seeking a revision in the 2009 gas deal with Russia since last spring, saying that the contract's gas price formula is unfair. Russia has tied the price for gas to the international spot price for oil, which has been rising strongly recently due to the instability in the Middle East.