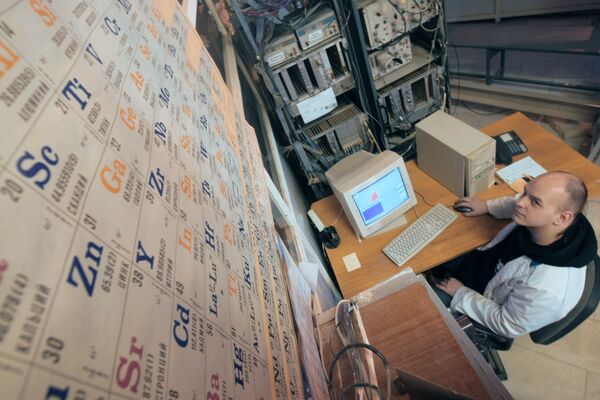 Physicists at Russia's Joint Institute for Nuclear Research (JINR) have been officially credited with synthesizing the heaviest elements yet to be included in the periodic table.

Physicists at Russia's Joint Institute for Nuclear Research (JINR) have been officially credited with synthesizing the heaviest elements yet to be included in the periodic table.

It took the Joint Working Party on Discovery of Elements of the International Union of Pure and Applied Chemistry (IUPAC) and International Union of Pure and Applied Physics (IUPAP) three years to determine that the team at the institute in Dubna near Moscow had, in cooperation with scientists at the Lawrence Livermore National Laboratory in California, successfully synthesized the superheavy chemical elements with atomic numbers 114 and 116.

Yury Oganessian, the leader of the Russian team, told RIA Novosti that the scientists now had to submit names of the elements for approval by IUPAC.

"The commission looks at whether the name is generally acceptable in accordance with the traditions of naming - in honor of the planets, after the place where the discovery was made, or in honor of great scientists," he said.

He would not reveal what the Russian physicists might propose, but did not rule out that one of the elements could be named in honor of the Soviet physicist Georgi Flerov, who led the institute's synthesis of element 105 in 1968. It is now known as Dubnium, after the town where JINR is based.

The institute's deputy director said in March that element 114 would be named for Flerov, and the name for element 116 would be derived from Muscovy, in honor of the Moscow region.

JINR intends to soon begin experiments on the synthesis of element 119 as the search continues for a so-called "island of stability" in the sequence of superheavy elements where scientists theorize that they will find atoms that live for decades or even longer.

Chemical elements heavier than uranium, number 92 in the periodic table, do not occur naturally on Earth. The two new elements decay in less than a second - element 116 lasting only milliseconds before decaying into element 114, which lasts for about half a second before becoming copernicium, which itself only officially joined the periodic table in 2009.