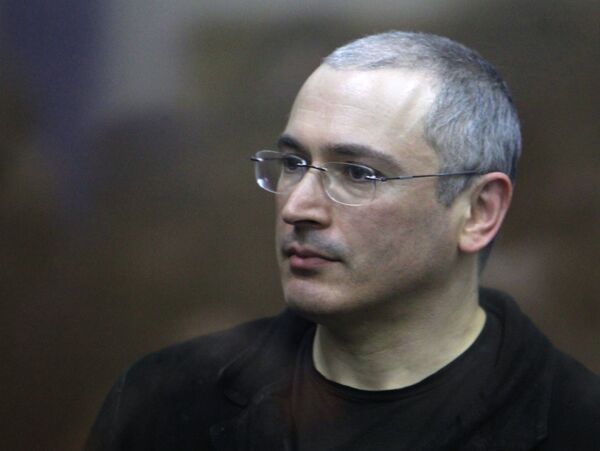 Ex-Yukos CEO Mikhail Khodorkovsky dismissed allegations that former Yukos executive Antonio Valdes-Garcia could have stolen oil from Khodorkovsky's firm and launder the proceeds, at a court session on Thursday.

Khodorkovsky, who is himself serving a prison term for Yukos-related crimes, appeared at a Moscow court as a witness in the trial of the former head of Yukos subsidiary Fargoil.

Valdes-Garcia, a Spanish citizen, is being tried in absentia as he has fled to Spain to avoid prosecution. He is accused of buying oil from Yukos-affiliated extracting companies at a large discount and then selling it at excessive prices between 2001 and 2003.

Khodorkovsky said the charges were baseless because Valdes-Garcia was not authorized by Yukos heads to buy or sell oil.

"The issues of oil purchase, selling and transportation were beyond his remit," Khodorkovsky told the judges at Moscow's Basmanny Court, adding that all decisions being made by Fargoil and other Yukos subsidiaries were "strictly controlled."

Valdes-Garcia's case was separated from another one, in which two former Yukos executives, Vladimir Pereverzin and Vladimir Malakhovsky, were sentenced to 11 and 12 years in prison, respectively, on the same charges.

Khodorkovsky denied claims that Valdes-Garcia was a member of a criminal group operating within Yukos, "simply because such a group did not exist."

"If Valdes-Garcia or any other director general [of a Yukos subsidiary] violated any instructions, I would have known about it in a week maximum," he said, adding that a violation of top executives' orders was considered a "very big sin inside Yukos."

If such violations were uncovered, the Yukos leadership would try to bring those guilty to trial on charges of abusing their authority, Khodorkovsky said, adding that every year, at least 100 such lawsuits was being filed by his company.

Earlier this year, the Spanish authorities expressed their readiness to resume negotiations with Russia on Valdes-Garcia's extradition. Accirding to Russian intelligence sources, he may be extradited as early as this summer.

Khodorkovsky, once Russia's richest man, and his business partner Platon Lebedev were jailed in 2003 on embezzlement and tax evasion charges. The two men were near the end of their eight-year prison term when they were sentenced to another six years in jail in December on charges of embezzling oil from Yukos an laundering the proceeds.

Last month, a Moscow court upheld Khodorkovsky and Lebedev's second conviction, but cut their sentences by a year. The two men have denied all charges against them, saying that they were a revenge for Khodorkovsky's funding of opposition parties during the presidency of Vladimir Putin, something the Russian authorities categorically deny.