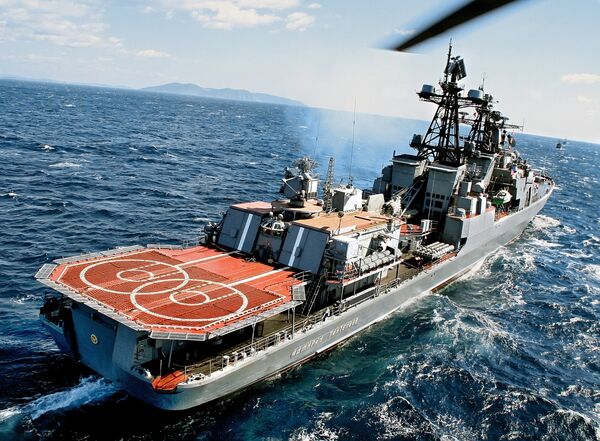 Russian Pacific Fleet's destroyer Admiral Panteleyev will visit Singapore and Indonesia on May 16-27 to take part in IMDEX-2011 naval exhibition and hold joint drills with the Indonesian navy.

The biennial IMDEX Asia International Maritime Defense Exhibition (IMDEX) is held in Singapore on May 17-19.

"Russian warships have taken part in this exhibition several times in the past," the fleet's spokesman Capt. 1st Rank Roman Martov said. " For instance, Russian missile cruiser Varyag - the flagship of the Pacific Fleet - visited Singapore on the same occasion in 2009."

Admiral Panteleyev, an Udaloy class destroyer, will stay in Singapore until May 20 before departing for Indonesia where it will take part in anti-piracy drills with the Indonesian navy.

"During the visit, the Russian and Indonesian warships will hold anti-piracy exercises," Martov said adding that the simulated mission would involve the rescue of a tanker seized by pirates.

The Russian destroyer will stay at the port of Makassar in eastern Indonesia on May 25-27.

Admiral Panteleyev took part in the international anti-piracy mission off the Somali coast in 2009.

The warship seized a boat carrying 29 suspected pirates, believed to have been involved in an unsuccessful attack on a Russian-crewed oil tanker en route to Singapore.

The destroyer also prevented a pirate attack on a cargo vessel while escorting a convoy of six merchant ships.