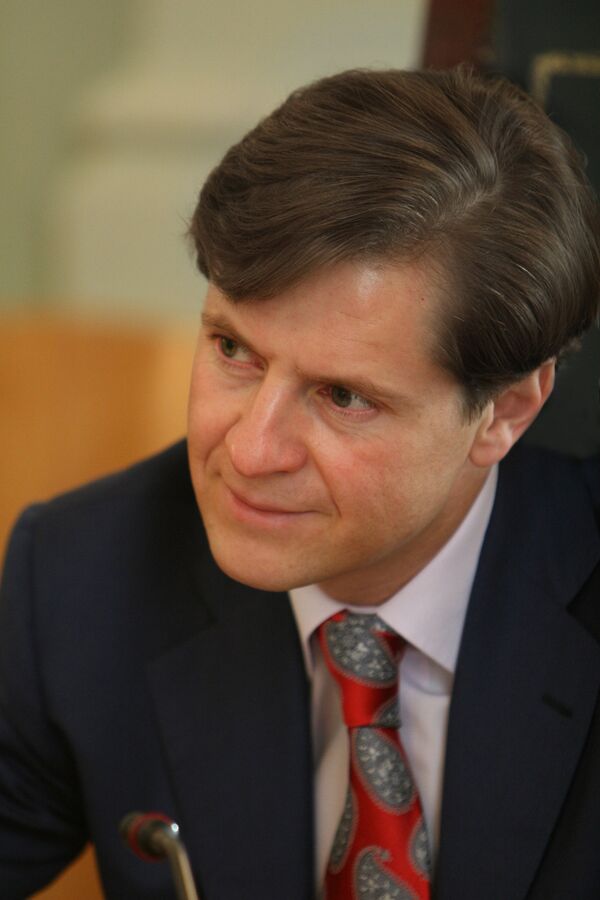 © Photo : Bank of Moscow
Subscribe
Bank of Moscow's embattled CEO Andrei Borodin said a few investors, including Russian, were ready to join a consortium to buy out the bank's shares from VTB, the banker said on Wednesday.

Bank of Moscow's embattled CEO Andrei Borodin said a few investors, including Russian, were ready to join a consortium to buy out the bank's shares from VTB, the banker said on Wednesday.

A fight for control over Bank of Moscow has been going on since February, when Russia's second largest bank, state-controlled VTB announced a gradual acquisition of Bank of Moscow. The Moscow city government sold its stake in the bank to VTB for $3.65 billion after President Dmitry Medvedev fired then Mayor Yury Luzhkov last fall.

"We have our own sources and investors who are ready to join a consortium with us," Borodin said.

Borodin, an ally of Luzhkov, also said he was ready to sell his joint-ownership of a 20.3% stake in Russia's fifth lender to the VTB bank based on a market capitalization of $6 billion.

In his letter to VTB Chairman Andrei Kostin received by RIA Novosti from London earlier on Wednesday, Borodin offered three solutions to his bank's shareholder conflict to be resolved within six days.

In his first option, Borodin suggested that he sell his Bank of Moscow share to VTB, the country's second lender, for a price agreed with the buyer quickly and with no mutual claims. Documents could be prepared within 10 days.

Another option could be independent assessment of his share to be sold to VTB, which would extend the process to 4-14 weeks, Borodin said.

The last option, he said, would be an auction like a "Texas Shootout or Mexican Standoff."

Borodin is currently in London, for health reasons, as he put it. He said he was not requesting a political asylum in Britain.

On Tuesday, Borodin said he intended to return to Russia despite plans to charge him with illegally granting a $444 million loan to Yelena Baturina, billionaire wife of former Moscow mayor Luzhkov. Baturina owns Inteco construction company. Borodin faces up to 10 years in prison if convicted.

Both Inteco and Baturina have consistently denied any wrongdoing in connection with the deals.

London has already become home to ousted Russian financier Boris Berezovsky and Yevgeny Chichvarkin, a founder of Russia's largest mobile phone retailer Yevroset. Luzhkov and Baturina have also been reported to have fled to Britain.