Magnetars - brighter than a galaxy, heavier than the Sun 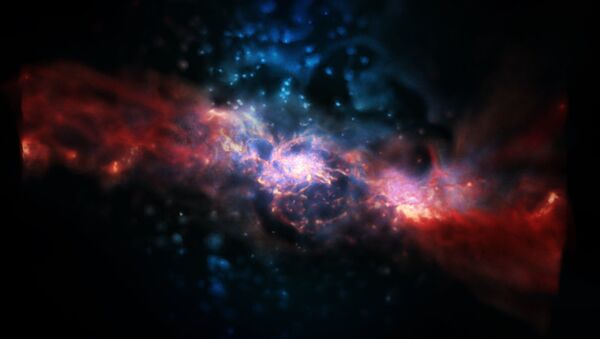 © Photo : Robert Crain, James Geach, Andy Green and Swinburne Astronomy Productions
Subscribe
Scarcely a week passes without scientists discovering new “threats to humanity.” These threats are often considerably exaggerated and gladly spread by mass media. Sergei Popov, Ph.D., senior research associate at the Sternberg Astronomical Institute, in an interview with RIA Novosti’s Samir Shakhbaz tries to separate the wheat from the chaff to find out where the real danger lies and what just the product of journalists’ fevered imaginations is. He also talks about magnetars – the most extreme form of neutron stars.

Scarcely a week passes without scientists discovering new “threats to humanity.” These threats are often considerably exaggerated and gladly spread by mass media. Meteorites hitting the Earth, exploding stars, fading Sun, you name it… Sergei Popov, Ph.D., senior research associate at the Sternberg Astronomical Institute,in an interview with RIA Novosti’s Samir Shakhbaz tries to separate the wheat from the chaff to find out where the real danger lies and what just the product of journalists’ fevered imaginations is. He also talks about magnetars – the most extreme form of neutron stars.

Samir Shakhbaz: Good afternoon, Sergei. While meandering through the endless expanses of the Internet once again, reading that we are on the threshold of every conceivable natural cataclysm and that end of the world is nigh, I came across yet another apparent threat: magnetars. To begin with, what are magnetars?

Sergei Popov: Magnetars are a special type of neutron star. Actually, neutron stars are very interesting astrophysical objects. They are the final product of heavy stars’ evolution. When a star explodes, its core collapses, turning into a sphere that is 10km in diameter.
Just imagine, all the fundamental laws of physics, the theory of relativity, the quantum theory and electrodynamics are concentrated inside a 10-km wide ball.

Samir Shakhbaz: They must be really dense.

Sergei Popov: They weigh slightly more than the Sun. If compressed to the point where they become black holes, then all their properties, except gravitation, vanish, and that makes them less interesting. Neutron stars, however, retain all those physical characteristics. There are many types of neutron stars and magnetars are the most extreme form. They have a number of specific characteristics, including substantial magnetic fields. As we remember from school physics lessons, magnetic fields are created by electrical currents. Consequently, these neutron stars have very strong electrical currents. Magnetars primarily emit energy from these currents, either quietly or in powerful flares, and it is these flares that are seen as a potential danger.

Samir Shakhbaz: Please correct me if I’m wrong, but these flares can outshine the entire Universe?

Sergei Popov: They are brighter than a galaxy. For a short period of time, this little neutron star emits more energy than an entire galaxy.

Samir Shakhbaz: That’s got to be very dangerous.

Sergei Popov: Actually stars are located a long way away from each other, at a distance of several light years and massive stars are quite rare. Consequently, the distance between them is even greater. At several light years’ distance, a flare like that could present a danger. Fortunately for humankind, but unfortunately for those studying them close up, the odds of magnetars coming dangerously close to the Earth are one in every several dozen million years.

Samir Shakhbaz: So is there any way that this energy, that is emitted many light years away, could have some kind of influence on the Earth, say through a chain reaction?

Sergei Popov: No, this energy is emitted as a burst of electromagnetic radiation, primarily X-rays. It diffuses over a large area, its effect weakening as it goes. The most powerful flare we have successfully observed took place in 2004, slightly energizing the Earth’s magnetosphere. This effect was of sufficient magnitude to be recorded by highly sensitive instruments, but humans did not notice anything. Incidentally, these flares are invisible, as they take place in the X-ray spectrum, but they can blind satellites. Our group in St. Petersburg, headed by Mazets, which discovered magnetars back in 1979 has obtained really unparalleled results. They were the only researchers who managed to see the flare, and their detector was not disabled. The effect was quite beautiful. If the detector takes a direct hit it is swamped by the photons and is unable to count them. They had two orbital detectors. One was located in the Earth’s shadow and managed to detect a signal reflected by the Moon. It was like the Medusa myth. Onlookers gazing directly at her would be turned to stone. But looking at her reflection in a mirror was harmless.

Samir Shakhbaz: You mentioned that magnetars were discovered in 1979. Would it be true to say that we still know very little about them?

Sergei Popov: In a sense, yes, you’re right, however astrophysics is currently experiencing a very productive phase of extensive development. In astrophysics, and this is a science of observation, it is still possible to build ever larger detectors using ever more advanced electronics. Notably, particle physics underwent a period of rapid growth in the 1960s and the 1970s but now they find it difficult to get large particle accelerators built. Astrophysicists are still at that first happy stage of development. Over the past thirty years, since magnetars were discovered, we have learned a great deal about their activity across the spectrum. New sources are discovered each year in the optical and X-ray spectrums, so as you see, this research is making rapid headway.

Samir Shakhbaz: Let’s move on to a slightly different area. Where do you think the threat to the Earth from outer space comes from, if indeed you believe there is such a threat? Meteorites? Or maybe the Sun will suddenly stop shining tomorrow?

Sergei Popov: Experience shows that outer space is really quite stable in terms of its scale, human lifespan or the history of human civilization. Actually, there have been no global space-linked cataclysms in recorded history.
There have been some local events, such as the Tunguska Meteorite. But as the Earth is primarily made up of oceans and deserts, and the chances of a major disaster happening in a densely populated area are very small indeed. There are many different threats, including magnetar flares, gamma-ray bursts and supernovas. Or the Earth may pass through cosmic dust clouds. It may be surprising, but such events take place once every several dozen million years.

Samir Shakhbaz: And where are we now on that time-line?

Sergei Popov: One the one hand, such events are a matter of chance, you can’t say that since the dinosaurs went extinct a hundred million years ago a critical event will unfold tomorrow. Fortunately, space is largely empty. It’s impossible to imagine a situation like, say, you’re walking down the street and accidentally get hit by a brick. Things don’t just happen by accident. If there is a massive star that is in danger of exploding, then we’ll hear about it beforehand.

Samir Shakhbaz: A lot is said about the possibility that the Earth will be hit by a meteorite.

Sergei Popov: If we’re talking about meteorites that are one kilometer in diameter, which are easily missed, then they could indeed have disastrous consequences: but only locally, not globally. Large objects are tracked, they can be seen from sufficiently large distances, and they are rather hard to overlook.

Samir Shakhbaz: Is there anything we can do? The movie “Armageddon” comes to mind here.

Sergei Popov: In reality, the trajectory of any potentially dangerous object can be calculated several decades ahead. Should such an object be detected, and should it become apparent that something of the sort could happen in the next few decades,  thankfully the pace at technology is advancing  it will mean that we will be able to do something about any such space object. We have a range of technology at our disposal: from attempting to destroy it to the more likely option of changing its orbit to ensure it misses Earth. I do not believe the Earth faces any significant threat from outer space. Unfortunately, we can see that all the main threats are linked with processes underway here on Earth or with our own behavior on this planet.

Samir Shakhbaz: Will such objects appear in the foreseeable future? The Internet is packed full of stories about them. Incidentally, a meteorite will be heading our way a year from now.

Sergei Popov: It’s a question people often ask. We should realize that people are keeping a close eye on outer space, and part of their job is to look for potential dangers. There are no real threats facing us, no threats that have even the slightest chance of materializing, in the short term.