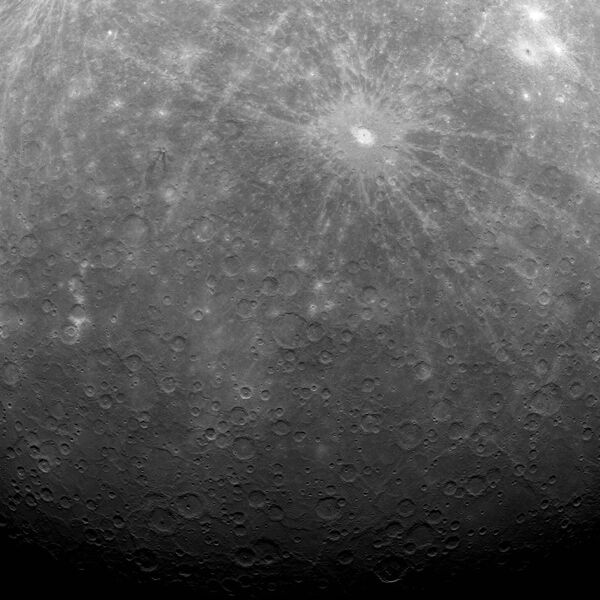 NASA's Messenger spacecraft, the first ever to enter the orbit of Mercury, has fetched its first photo, the project's website said.

The image, the first ever obtained from a spacecraft in orbit around Mercury, was taken as the spacecraft sailed high above the planet's south pole. It features portions of Mercury's surface not previously seen by spacecraft.

"The first images from orbit and the first measurements from Messenger's other payload instruments are only the opening trickle of the flood of new information that we can expect over the coming year," the website quoted Messenger Principal Investigator Sean Solomon as saying. "The orbital exploration of the Solar System's innermost planet has begun."

The image was acquired as engineers checked how the spacecraft's systems are sustaining Mercury's harsh thermal environment after all equipment was turned on March 23. The scientific mission will begin on April 4.

"Instrument checkout has been proceeding according to plan," the scientist said.

It took the spacecraft more than six years to enter the orbit of Mercury, the least explored terrestrial planet of the inner Solar system.

To reach its destination point, the spacecraft, launched in 2004, covered more than 7.8 billion kilometers. It followed a complicated route through the inner solar system, which included one flyby of Earth, two flybys of Venus, and three flybys of Mercury.

Mercury is the smallest and densest of the four terrestrial planets. It also has the oldest surface and the largest daily variations in surface temperature. Before the Messenger mission, only 45% of the surface of Mercury had been photographed by a spacecraft. The previous mission was Mariner-10, launched in the 1970s.