Russia must avoid getting drawn into revolutions in Africa 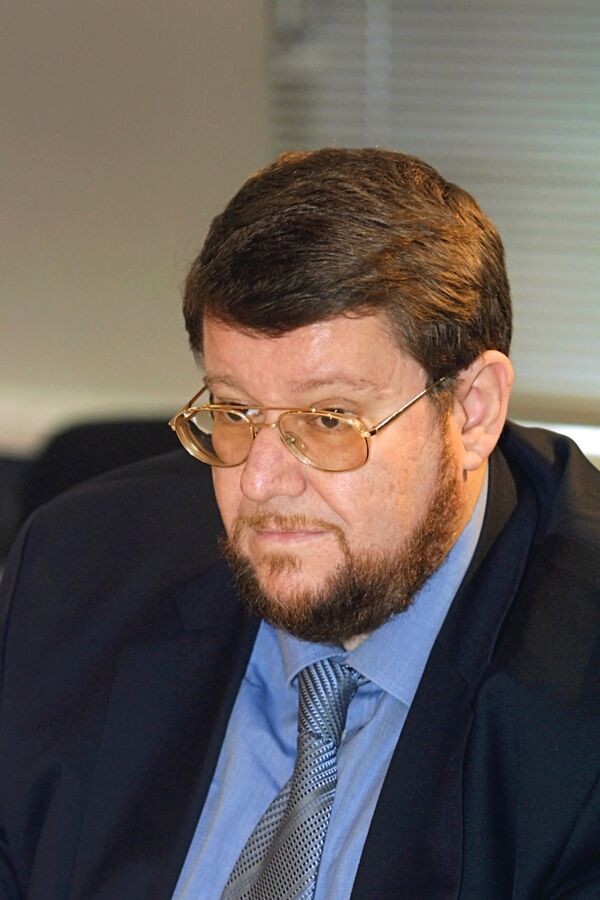 © RIA Novosti . Alexander Polyakov
/
Go to the photo bank
Subscribe
More and more experts are coming to the conclusion that non-Arab Africa will fall victim of revolutions. The delayed action mine planted by the Europeans during colonization will definitely have a cumulative effect on the whole of central Africa, Yevgeny Satanovsky, president of the Middle East Institute claims. In an interview with Samir Shakhbaz he also insists that Russia must avoid getting involved in possible wars.

More and more experts are coming to the conclusion that non-Arab Africa will fall victim of revolutions. The delayed action mine planted by the Europeans during colonization will definitely have a cumulative effect on the whole of central Africa, Yevgeny Satanovsky, president of the Middle East Institute claims. In an interview with Samir Shakhbaz he also insists that Russia must avoid getting involved in possible wars.

Shakhbaz: Welcome, Mr. Satanovsky. You said in a previous interview that the unrest in the Middle East and North Africa could spread to non-Arab Africa as well. What makes you believe that?

Satanovsky: Not just Africa, but other former British and French colonies. Take Pakistan, for example, which possesses approximately 110 nuclear warheads. The country could collapse like Sudan. Libya already seems to be heading in that direction. The borders of all African countries except Botswana were drawn by colonial powers, with no regard for ethnic and religious differences. The Middle East, just like Africa, is populated by tribes.

But, whereas the tribes and clans of the Middle East had a thousand years to forge states, Africa is in a far worse position. Whatever semblance of a state the local tribes had was destroyed by the invaders, who organized their colonies along the principle of divide and conquer. Remember how the south of Nigeria tried to break away from the north? Nigeria was created by the British. Its northern and southern tribes were not at all happy to be tied together. They have nothing in common, but they were forced to share one land, or rather one battlefield. The same can be said of Tanzania, Kenya, Tunisia, Egypt and Libya. Somali has already de facto collapsed. The largest refugee camp is in Kenya, with over 100,000 Somalis living there. This is a delayed-action mine. It will have a cumulative effect on the whole of central Africa.

The new water sharing agreement signed by six upstream Nile countries could be the precursor of a pan-African war. Africa experienced its first ‘world war’ when ten Congo basin countries fought each other, only the world didn’t take notice. There will be more conflicts in the future. The break-up of Sudan has signaled to the rest of Africa that their colonial borders are no longer legitimate, while the uprisings in Egypt, Libya and Tunisia sent a much clearer signal: leaders that have been in power for decades can be overthrown. Pandora’s box has now been opened, and we are still waiting to see what will emerge.

Shakhbaz: Do you really think the popular revolutions in North Africa opened that box? I have heard two theories. One says the uprisings were provoked from the outside. The other says they were the result of the policies of George W. Bush.

Satanovsky: All revolutions are popular, because they require a large crowd pouring into the streets to overthrow a regime. But has a revolution ever started without foreign influence? Everyone in Paris believed that the French Revolution was instigated by Britain, while a century before that, everybody in Britain was perfectly aware that King Charles I was dislodged by French intrigues. Everybody is plotting against everybody, and not always against enemies. Some are plotting against their allies. Take the Arab world. Al Jazeera is rocking the boat for the emir of Qatar using his personal preferences and personal enemies. Al Arabia is working for Saudi Arabia and the Muslim Brotherhood. Other networks that are now working for tens and hundreds of human rights groups, foundations and individuals like George Soros or WikiLeaks – they were all established to work against the Soviet Union. After the collapse of the Soviet Union, they had to find a new outlet for their efforts. Some switched to crusading against globalization, others to advocating for human rights and democracy; some act against Israel and the United States, and others against dictatorial regimes in Africa and the Middle East. This is having an enormously destructive impact, not to mention Iran, whose interests lie beyond the Middle

East and extend to the whole of Africa. All that pressure from European countries, the United States, Turkey, Iran, Islamist groups and specific Arab regimes creates a situation where everyone is plotting against everyone else. As a result, if a regime is weak, like in Tunisia, Egypt or Libya, it is bound to collapse.

Shakhbaz: How do you think officials in Moscow should respond? The consequences of taking action are unclear, but if Moscow doesn’t act soon it might lose its influence in the region.

Satanovsky: Personally I would be happy if Russia lost its influence through inaction. Many groups are now calling for an end to the designation of the Muslim Brotherhood (which is poised to take power in several countries) as a terrorist organization. Remember that Jimmy Carter said Khomeini was OK and that it was possible to deal with him. We know what deal they made. In fact, everyone is OK depending on your perspective. There are people who remember the Soviet era and are asking Russia for money – much in the same way as the Soviet Union financed loyal regimes.
Remember that the Soviet Union never got its money back, about $160 billion. Our sovereign debt never exceeded $140 billion, not even in the worst times. Russia could have balanced accounts, but Gorbachev failed to raise $30 billion to prevent the Soviet Union from going bankrupt.

Bulgaria exists today only thanks to thousands of Russian soldiers who died fighting against Turkey, which fought against Russia in both world wars. We got involved in World War I, which was not our war, and lost the country. We went broke after foolishly lending billions and came into conflict with everyone in the mad political experiments of the second half of the 20th century – such as our involvement in Afghanistan, where the Soviet government allegedly supported the local working class.

We still don’t know why the Soviet Union got involved in Afghanistan in the first place, unless we believe that we were dragged into the conflict by the clever U.S. official Zbigniew Brzezinski, who didn’t care for the Soviet Union. Do we need to step on that rake again? Why don’t we look at China instead? That country is busy building its own highways and railways and looks to the Middle East and Africa only for commodities. For the Chinese, ‘influence’ means ‘benefit,’ cynical and pragmatic as it might sound. However, the Chinese government has never been accused of not knowing what it is doing. The same holds true for Turkey and Iran. If Russia has a real interest, something it desperately wants in that tumultuous region, then we’ll go for it. If not, let’s stay out of trouble. We should not get involved just to spite the Americans. We should not follow the French who, incidentally, are rapidly drawing down their presence everywhere, including Djibouti, for economic reasons. Many regions in Siberia and Russia’s Far East are poorer than the countries we are trying to support. Let’s compare the living standards and life expectancy in Russia and, say, in Gaza – life expectancy for a man is 10 years longer in Gaza.

Shakhbaz: What about other countries – NATO members, for example? If your gloomy forecast comes to pass, the whole of Africa will soon be ablaze? Do you think we should stand back and watch while NATO and the UN send troops and conduct operations there?

Satanovsky: Russia joined a NATO operation only once, in the late 1970s, during one of the Somali revolutions. A Russian task force fought there together with American Green Berets and French combat swimmers. They helped evacuate white people from Somalia. The locals were ready to kill anyone – Europeans, Chinese, Russians or Americans – just for being different. That operation made sense. We tried to save our people. This is the only reason to get involved. In all other cases, we should not ruin our own country for the sake of some imperial illusions. As the current balance of forces in Afghanistan and Iraq shows, NATO is not even a force capable of fighting in Africa or the Middle East. Americans are capable of fighting, and so are the British. Task forces from Canada, Australia and New Zealand also conducted a couple of successful operations.

Let’s stop thinking of NATO as a serious bloc with high precision weapons capable of fighting on the ground in the Middle East. The German army is no longer what it used to be during WWII – it’s a defense force trained for the kind of humanitarian operations it is conducting in Afghanistan. The last time the Italian army fought successfully in the Middle East was 2000 years ago, under the command of Julius Caesar.
Russia has its own problems in the North Caucasus, and is bound to have more on its Central Asian borders, as drug trafficking from Afghanistan continues to grow. We will be lucky if Russia is spared the millions of refugees who will soon flow into Western Europe from the Middle East and North Africa. It is unclear how Europe is going to deal with them.

Russia is always being asked to send troops – if not to Libya and Gulf countries, then to Afghanistan to help out NATO. They would be happy to see us in Africa as well, but I don’t think we should do this. I don’t think Russia should ask for trouble by getting involved in a war that is not ours.