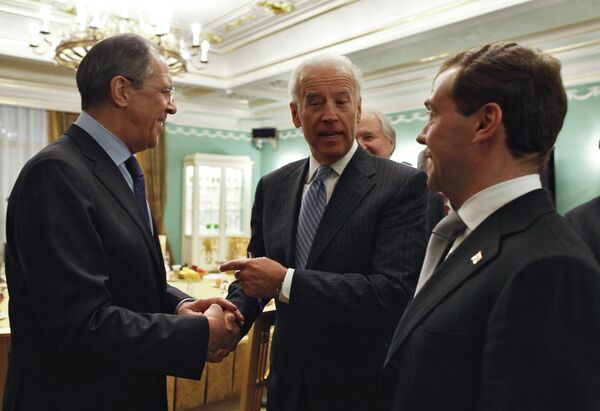 U.S. Vice President Joe Biden said on Wednesday that Russia's membership in the World Trade Organization was a top priority for the United States which also hoped to cancel a trade restriction provision.

U.S. Vice President Joe Biden said on Wednesday that Russia's membership in the World Trade Organization was a top priority for the United States which also hoped to cancel a trade restriction provision.

WTO accession for Russia is "the most important item on our agenda," Biden said at a meeting with Russian President Dmitry Medvedev in his Gorki residence near Moscow.

Russia has been in talks on membership in the 153-nation WTO for 17 years. A recent Russia-EU summit assessed its chances to join the organization this year as very high.

Another important issue on the bilateral economic agenda is the long-standing Jackson-Vanik Amendment on restricting trade with the Soviet Union, which the U.S. Congress had adopted in 1974 to pressure the USSR into allowing emigration.

Biden, 68, said that his first visit to Russia was in Leonid Brezhnev's times, and that he was so old that he had known the late Jackson and Vanik personally. Biden was first elected to the Senate in 1972, which made him one of the youngest senators in U.S. history.

Medvedev said the Jackson-Vanik Amendment regularly came under discussion during bilateral meetings and added the law would hopefully become history by the next negotiations.

"You simply can't allow this issue to dominate your entire career," Medvedev said.

Russia's chief trade negotiator, Maksim Medvedkov, said on Wednesday that abolishing the Jackson-Vanik Amendment was a political matter and that the latest consultations on Russia's WTO bid did highlight the issue but no specific results were achieved.

Russian-U.S. relations began their "reset" in 2009 when Foreign Minister Sergei Lavrov had his first meeting with new U.S. Secretary of State Hillary Clinton in Geneva, which signified a thaw in bilateral relations after George W. Bush's tenure.

"I think we've proved the skeptics wrong: We have had great progress in the last two years," Biden said.

Biden said the two countries had boosted cooperation in arms reduction, in the North Korean settlement, Iran, Afghanistan and other important areas.

Biden hailed Russia's role as a superpower and said he had been one of the first people to talk about resetting bilateral ties.

The U.S. vice president also said that today's meeting with Medvedev left him with a feeling that he had met with one of the most powerful people in the world.

Medvedev took over office from Vladimir Putin in 2008, after which many said he would be nothing but a puppet in the hands of the ever-powerful and sometimes even intimidating Putin.

"In my career when I sat down with a Russian leader I sat with one of the most powerful men in the world. I still feel that way," Biden said to Medvedev.

Biden told the Russian president that Russians might think Washington had unreasonably high expectations from their country, but "the expectation is born out of admiration and respect, not out of disrespect."