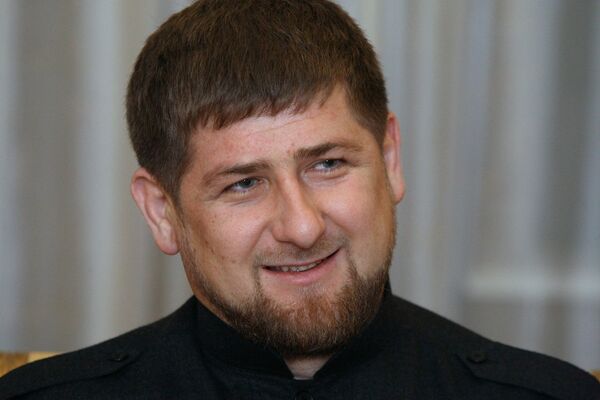 Former FIFA world players of the year Ruud Gullit and Lothar Matthaus were unable to prevent a side captained by Chechen leader Ramzan Kadyrov from losing to a team of Brazilian stars in Grozny on Tuesday evening.

Former FIFA world players of the year Ruud Gullit and Lothar Matthaus were unable to prevent a side captained by Chechen leader Ramzan Kadyrov from losing to a team of Brazilian stars in Grozny on Tuesday evening.

The match took place at the Sultan Bilimkhanov stadium, where Kadyrov's father, Chechen president Akhmad Kadyrov, was killed by a bomb in 2004. The late Chechen leader's portrait, as well as images of Prime Minister Vladimir Putin and President Dmitry Medvedev, adorned the arena, which was full to its 10,000 capacity.

Entry to the game, billed as "a gift to Grozny fans before the new Russian season" was free. Kadyrov said before the match that the Brazilians were in Grozny "out of respect" for the Chechen people, and denied that any payments had been made.

Kadyrov's side quickly fell two behind, as the Brazilians toyed with their opponents, who included several overweight members of the Chechen government. Romario and co. then generously allowed Team Grozny back into the game, and Kadyrov scored twice, despite missing two penalties.

Half-time saw Kadyrov perform an energetic lezginka - a traditional Caucasus dance - on the pitch as fans in hats bearing his initials chanted his name in approval and world media recorded the event.

The republic's sports minister Khaidar Alkhanov said before the unlikely encounter that the purpose of the game was to provide an "impetuous for the development" of this small southern Russia republic, which suffers from around 40% unemployment and a lingering Islamist insurgency.

Some 50 foreign journalists flew into Grozny for the event and Kadyrov fielded questions at a late night news conference on the eve of the match.

"If I wanted someone dead, I would kill him here in Grozny and no one would know," he said when asked about the alleged assassinations of his opponents beyond Russia's borders.

He also denied that he had anything to do with the ubiquitous banners and billboards featuring his image throughout Grozny.

"It's not my idea," he said. "But if no one touches them it means they respect me."

But at an impromptu news conference after the game, Gullit refused to be drawn on the rights and wrongs of his presence in Chechnya, saying he did not think about the politics of the region.

"I have to be concerned only with football, the rest is not my concern," he said.