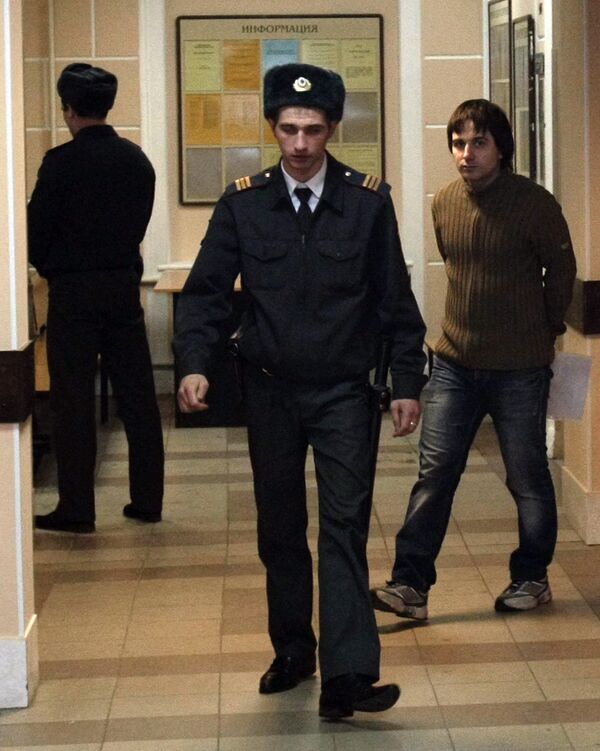 Three members of the controversial Russian art group Voina (War) have been attacked in St. Petersburg by assailants claiming to be police officers, their lawyer says.

Three members of the controversial Russian art group Voina (War) have been attacked in St. Petersburg by assailants claiming to be police officers, their lawyer says.

Leonid Nikolayev, Oleg Vorotnikov and his wife, Natalia Sokol, were set upon by seven men on Thursday as they walked home after a news conference.

"Around seven men in civilian clothes were trailing them. When [Voina members] made to take a photo of them, they laid into them shouting 'We are from the police.' They were waving their IDs around and kicking the guys," lawyer Dmitry Dinze said.

All three were hurt in the attack, although they were not hospitalized.

The news conference was Vorotnikov and Nikolayev's first public appearance since they were freed on bail after three months in jail on charges connected with the overturning of police cars in St. Petersburg, a stunt which went by the name of "Palace Coup."

The two face up to seven years in jail if convicted. Bail was reportedly posted by British artist Banksy, who earlier donated almost $130,000 from a print sale to the group.

Speaking at the news conference, Voina head Nikolayev said he feared police could commit him to a psychiatric hospital, a tactic widely used in the Soviet era to suppress dissidents.

"They ordered us to undergo a psychiatric examination," Nikolayev said. "This indicates that they probably want to lock us up in a madhouse."

He added their time in jail was "interesting and edifying," and that they were planning to direct their actions against officials and politicians drawing on their newly garnered knowledge of human rights abuses behind locked doors.