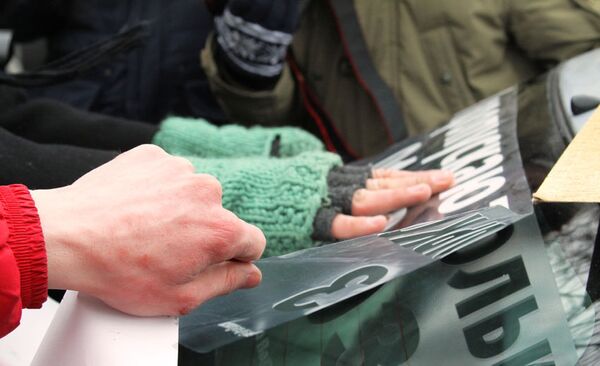 On a hill high above Moscow, dozens of motorists line up for car stickers protesting against officials' abuse of car sirens.

Many of these people are members of the Blue Bucket Society, a grassroots group formed last year to direct public anger over the brazen disregard for traffic rules displayed by drivers with the blue flashing lights, known as migalki.

The migalki are a symbol of the privileges afforded to Russian bureaucrats, who use the lights to speed around Moscow's ubiquitous traffic jams that regular drivers spend hours sitting in.

There was uproar a year ago when two women were killed in down town Moscow in a head-on collision with a migalka-ed Mercedes of Anatoly Barkov, the vice-president of Russian oil giant LUKoil.

Witnesses say the executive's car was driving on the wrong side of the road, claims denied by a LUKoil spokesman. No charges were brought after police said they lost the CCTV footage of the accident.

Large numbers of police are posted along the curb at the Sparrow Hills in southwest Moscow, threatening to take the activists' cars to the impound lot.

"It is a provocation," police Col. Anatoly Kostin says as protesters wait in line for stickers the Blue Buckets are handing out for free.

"I only give way to 01, 02, 03," the stickers declare, referring to the emergency numbers for the police and fire and ambulance services.

"It's not a call to action," says Pyotr Shkumatov, the figurehead of the Blue Buckets who glue or bolt the plastic pails to the roof of their cars in mimicry of the migalki. "The text reflects the attitude of each particular person."

Only emergency and law enforcement vehicles should be allowed a special siren, he says.

But in more than a year of similar protests, the group has yet to catch fire with the wider public, and the question remains, will it lead to any real change? Are the Russian elite ready to give away their privileges?

"Of course it will," activist Gennady Mironovich says. "If everybody pitches in, something's got to change. If they could do it in Africa, why could we not do it here?"

In the latest accident involving a VIP vehicle, a woman was seriously injured last month after her car collided with the chauffeured BMW of Russian presidential envoy Garry Minkh.