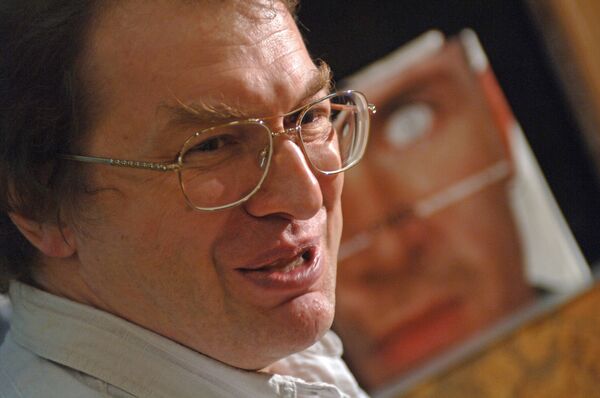 © RIA Novosti . Vladimir Vyatkin
/
Go to the photo bank
Subscribe
The notorious organizer of a 1990s pyramid scheme whose collapse cost millions of Russians their life savings pledged on Friday to bring about the downfall of the global financial system.

The notorious organizer of a 1990s pyramid scheme whose collapse cost millions of Russians their life savings pledged on Friday to bring about the downfall of the global financial system.

“I want to create a financial apocalypse…it will be everywhere… I have offers from every country. From the US, from India…from India. This system will be everywhere, this is the Internet we are talking about, there are no borders,” he said.

Mavrodi, 55, recently unveiled his new project in a video blog. MMM-2011, with the three Russian letters standing for "We Can Do a Lot," uses the online payment system, WebMoney, to allow investors to buy tickets that work like shares, but have no real value. The project's mastermind has promised investors returns of 20-30 percent per month.

The former mathematician, who was released from prison in 2007, described the new project as a "financial social network." While the 1994 scheme used an aggressive TV and radio advertising campaign to reel in investors, the new project relies solely on the Internet, a move which many see as a bid to attract the attention of Russia's technologically-savvy youth

Mavrodi's 1994 swindle, which came to be regarded as a symbol of the lawlessness of the chaotic 1990s in Russia, was one of the largest of hundreds of other such schemes of that era. The projects took advantage of the ignorance of a nation still learning the basics of a new capitalist system. Ponzi schemes became so commonplace that their prices were quoted on the front pages of newspapers.

According to different estimates, the MMM scam attracted between two and five million investors, including a number of high-profile celebrities, who lost around $1.5 billion when it collapsed.

Mavrodi continues to insist that he did not break any laws and blames government interference for the collapse of the project. He still enjoys popular support and was even handed a bouquet of flowers on his release from prison.

An express poll conducted by the Ekho Moskvy radio station suggested that around 25 percent of Russians would be willing to take part in the new pyramid scheme.