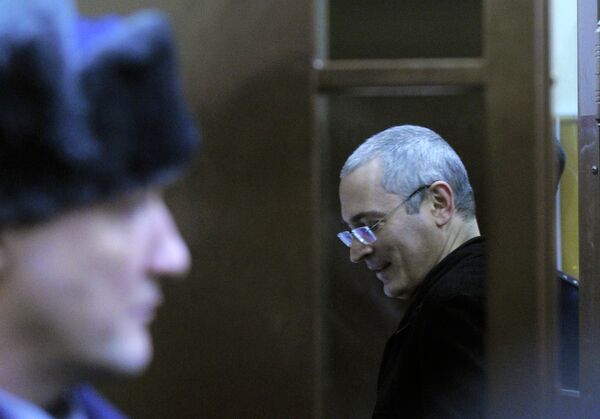 The European Parliament's Subcommittee on Human Rights will discuss on Monday the verdict to Russian ex-oil tycoon Mikhail Khodorkovsky and his business partner Platon Lebedev.

The European Parliament's Subcommittee on Human Rights will discuss later on Monday the verdict to Russian ex-oil tycoon Mikhail Khodorkovsky and his business partner Platon Lebedev.

"The Human Rights Subcommittee will discuss the recent second trial and conviction in Russia of Mikhail Khodorkovsky and Platon Lebedev," the subcommittee said in a press release.

In late December, the Khamovniki District Court in Moscow sentenced Khodorkovsky, the former CEO of the Yukos oil company, and Lebedev to a total of 14 years in prison in the second trial involving Yukos assets. The two men, who already spent seven years in jail for fraud and tax evasion from their 2005 trial, could remain behind bars until 2017.

Russia's once richest man Khodorkovsky has been found guilty of stealing 218 million tons of oil from his own company, Yukos, and laundering the proceeds, worth around $100 million.

Khodorkovsky and Lebedev have repeatedly denied the charges, saying they were politically motivated.

Many Western countries and organizations, including the United States and the European Union, have condemned the verdict as harsh and unfair, and expressed concern over the fact that the judicial system in Russia has shown no signs of improvement despite President Dmitry Medvedev's pledge to make it just and transparent.

Khodorkovsky and Lebedev's lawyers have already sent an appeal against the verdict to the Khamovniki District Court.