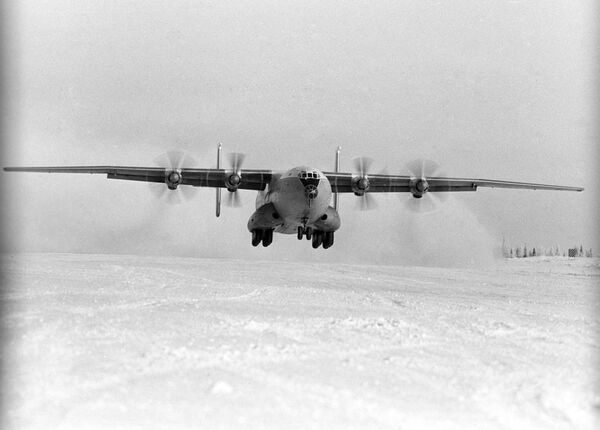 An Antonov An-22 military transport aircraft crashed on late Tuesday on the border of the Tula and Oryol Regions in central Russia.

An Antonov An-22 military transport aircraft crashed on late Tuesday on the border of the Tula and Oryol Regions in central Russia, the Defense Ministry said.

"An-22 aircraft en route to the airport of Migalovo disappeared from the radar screens at 21:30 Moscow time [18:30 GMT]. The search for the aircraft is underway, the location of the crash scene is still unknown," a spokesman for the ministry said.

According to preliminary information, about 12 people were on board of the Russian Air Force aircraft, a source in the ministry said.

"Considering that the aircraft disappeared from the radar screens at 21:30 and there are still no messages from the crew and the passengers we may allege that they are dead. However, it is only an allegation since we have not yet located the aircraft," the source said.

He said one of the reasons behind the crash might be a failure of aviation equipment, particularly an engine failure.

Alexander Yevteyev, a deputy governor of the Tula Region, confirmed that the aircraft was not found yet, but said it is still early to speak about the crash and the casualties.

"According to the Defense Ministry, the plane disappeared from the radars and the communication was lost. It is unknown what has happened in reality. Perhaps, it was a forced landing. Such things happen," he said.