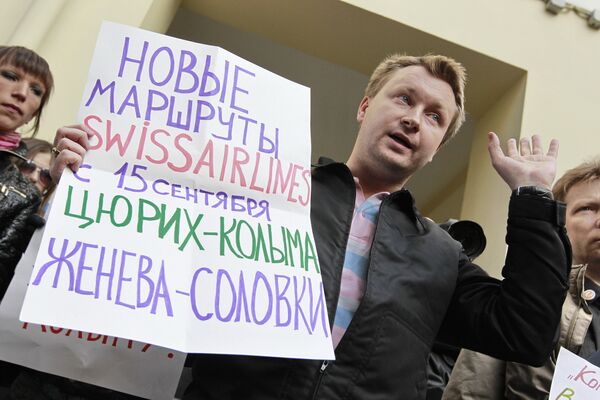 A rally against gay parades, legalization of same-sex marriages and immorality propaganda gathered some 1,000 protesters on Bolotnaya Square in central Moscow on Saturday.

A rally against gay parades, legalization of same-sex marriages and immorality propaganda gathered some 1,000 protesters on Bolotnaya Square in central Moscow on Saturday.

The rally was organized by a number of Orthodox organizations and began with a prayer. Many people carried icons and signs reading "We do not need gay parades!", "A gay parade will never be held in Moscow", and others.

The rally followed the recent ruling of the European Court of Human Rights that Moscow's ban on gay pride marches is illegal.

Requests to hold gay pride marches, described by ex-mayor Yury Luzhkov as "satanic," have been rejected by the Moscow authorities for years.

Vladimir Khomyakov, a co-chairman of the Narodny Sobor (People's Gathering) Orthodox organization, said, "Despite the stories about our belligerent homophobia, we have never urged and are not urging to destroy gay clubs and attack gays. We have come to claim that the ECHR ruling is a gross interference in Russia's domestic affairs and a violation of the Russian constitution and international law."

He said a gay parade if allowed by the Moscow authorities will cause a conflict between police and people who consider it immoral.