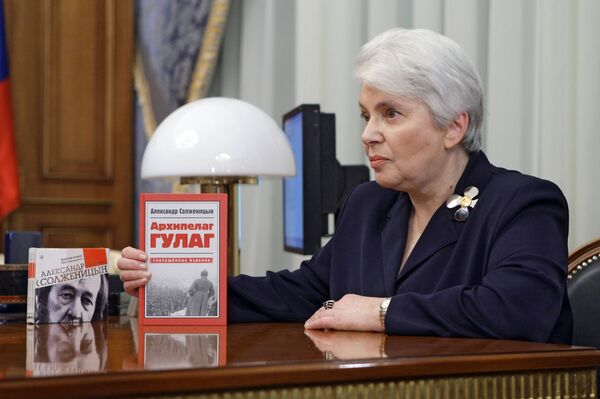 © RIA Novosti . Alexey Nikolskiy
/
Go to the photo bank
Subscribe
The widow of Russian writer Alexander Solzhenitsyn presented on Thursday an abridged edition of The Gulag Archipelago that publishers hope will eventually be read by every Russian student.

The widow of Russian writer Alexander Solzhenitsyn presented on Thursday an abridged edition of The Gulag Archipelago that publishers hope will eventually be read by every Russian student.

"It is necessary that people know what has happened in our country when they finish school," 71-year-old Natalya Solzhenitsyna told journalists at the presentation of the book in Moscow.

The Gulag Archipelago vividly describes the mass arrests of innocent people and their deportation to labor camps during the Soviet era and Solzhenitsyna said people should know that they "were not just individual episodes, but a round-the-clock mowing down of people."

Solzhenitsyn, who was declared a "betrayer of the Fatherland" after publishing his anti-Communist book in Paris in 1973, had plans to cut the three-volume masterpiece to make it easier for readers, the writer's widow said.

"But it was difficult for him, as for the father of a child," Solzhenitsyna said.

For her, however, it was a "happy and bitter-sweet" labor.

The Gulag Archipelago, which was banned in the Soviet Union for 16 years until 1989, was included in the list of compulsory books for studying at schools across Russia only in September last year.

Yelena Niziyenko, who heads the secondary education department of the Russian Education Ministry, said she was sure the new book would be popular among school students.

While cutting back the book, Solzhenitsyna managed to maintain its logic and highlights, she said.

At a meeting with Solzhenitsyna on Tuesday, Prime Minister Vladimir Putin - a former KGB agent - said the book was essential reading for students to have a full understanding of Russia.

Solzhenitsyn, who fought in World War II, spent eight years in labor camps, and lived in exile for 20 years before returning to Russia after the fall of the Soviet Union, died of heart failure at the age of 89 in August 2008.