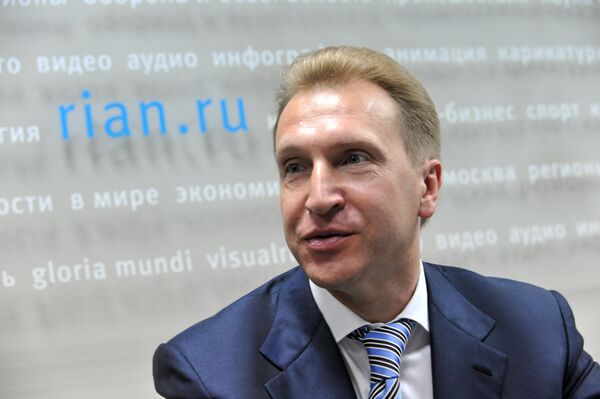 The Russian government has approved a plan to privatize a wide range of state property from energy to agriculture and banking to transportation in the next five years, First Deputy Prime Minister Igor Shuvalov said.

The Russian government has approved a plan to privatize a wide range of state property from energy to agriculture and banking to transportation in the next five years, First Deputy Prime Minister Igor Shuvalov said.

For the first time in its history, the government may offer a quarter of Russian Railways monopoly for sale in 2013-2015 and 50 percent minus one share of the country's largest shipping company, Sovcomflot, in 2011-2013. If all company shipyards are loaded fully, the government may sell a controlling stake in Sovcomflot before 2015, Shuvalov said late on Wednesday.

In the oil sector, the government will offer up to 15 percent of the country's top oil company, Rosneft, from 2012 to diminish its controlling stake by 2015 via asset swaps. After 2015, the state's stake will continue falling to zero.

However, sales of oil transportation monopoly Transneft and Zarubezhneft, Russia's overseas oil projects operator, is not on the government's agenda, Shuvalov said.

He said Russia may sell almost eight percent of its largest hydropower producer, RusHydro, before 2013 and lower the state's stake in the company to 25 percent plus one share before 2015. The state may also sell 4.11 percent of the Federal Grid Company of Unified Energy System (FGC UES), if the share price grows to 50 kopecks per share.

In agribusiness, Russia will sell 50 percent minus one share of agricultural leasing company Rosagroleasing in 2013-2015 and 100 percent of the United Grain Company grain operator before 2013. The government will also sell a quarter of Russian Agricultural Bank, the core creditor of agriculture.

In the banking sector, Shuvalov said the government would try to complete a deal to sell 10 percent of the country's second largest bank, VTB, to a pool of investors led by TPG fund this year. It will sell another 10 percent in 2011 and 15 percent in 2012. In the future, the government plans to diminish its stakes to below a controlling share.

The government suggested the central bank cut its stake in the country's top bank, Sberbank, to control in 2011-2013. But it sees no prospects in privatizing the Agency for Housing Mortgage Lending.

Shuvalov said the government was ready to privatize Sheremetyevo International Airport in Moscow and cut its stake below a controlling share in the country's flagship airlines Aeroflot.