Russia hold out for vital Euro 2012 victory over Ireland 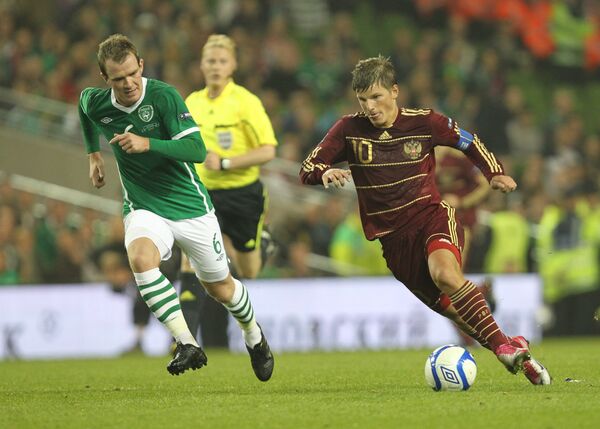 Russia survived a late Irish rally in Dublin on Friday evening to win 3-2 and move joint top of Euro 2012 qualifying group B on points.

Russia survived a late Irish rally in Dublin on Friday evening to win 3-2 and move joint top of Euro 2012 qualifying group B on points.

After losing 1-0 at home to Slovakia last month, Russia desperately needed at least a point, but they almost fell behind early on when Robbie Keane hit the woodwork after a frantic Ireland attack.

But Russian nerves were settled in the tenth minute when Zenit St. Petersburg striker Alexander Kerzhakov got on the end of a clever Sergei Ignashevich overhead pass to open the scoring.

Things got even better for Russia in the 28th minute, some clever build up play involving Kerzhakov and Arsenal’s Andrey Arshavin leaving CSKA Moscow star Alan Dzagoyev with plenty of time to make it 2-0.

Russia looked to be heading for a comfortable and impressive win when Roman Shirokov’s shot from outside the penalty box took a deflection off Richard Dunne to leave Irish keeper Shay Given stranded and put Russia 3-0 up six minutes into the second half.

The Irish comeback began in the 72nd minute, when Keane converted a spot kick after Yury Zhirkov was perhaps harshly judged to have brought him down in the box.

The hosts reduced the deficit to a single goal with 12 minutes left to play when Ireland’s man in Russia, new Spartak Moscow signing Aiden McGeady, got in a wicked shot that Igor Akinfeev could only parry, Shane Long hammering home the rebound.

Ireland threw men forward in a desperate attempt to rescue a point, but were unable to find the final ball. Russian substitute Pavel Pogrebnyak should have made things safe as the clock ticked down, scuffing the ball wide after a pass from Zhirkov had left him with only Given to beat,

In other Group B games, Armenia shocked Slovakia in Yerevan, winning 3-1, while Macedonia beat Andorra 2-0.

Russia, Ireland and Slovakia are now all equal top with six points after three games.

Russia travel to Macedonia on Tuesday, while Slovakia host Ireland.