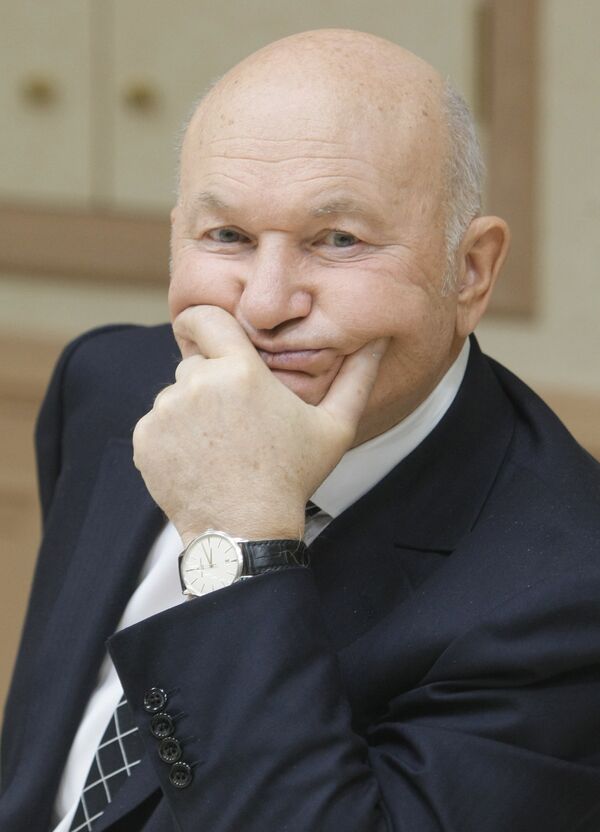 © RIA Novosti . Alexei Nikolskiy
/
Go to the photo bank
Subscribe
President Dmitry Medvedev has fired Moscow Mayor Yury Luzhkov with immediate effect. While First Deputy Mayor Vladimir Resin takes the reins of the capital in Luzhkov's place, Muscovites and political analysts are wondering who is big enough to step into the shoes of one of Russia's political big beasts.

President Dmitry Medvedev has fired Moscow Mayor Yury Luzhkov with immediate effect. While First Deputy Mayor Vladimir Resin takes the reins of the capital in Luzhkov's place, Muscovites and political analysts are wondering who is big enough to step into the shoes of one of Russia's political big beasts.

Luzhkov's demise comes after a fortnight of incriminating documentaries on state-owned television channels and anonymous briefing against the Mayor by Kremlin aides, prompting accusations of non-transparency from Muscovite politicians.

"This whole situation is an utter insult to Muscovites," said Dmitry Katayev, a member of the Moscow City Duma between 1990 and 2005 and a long standing critic of the outgoing mayor.

"Because all of these struggles are taking place in the shade, the media has been given certain directions, but again, under the table, not to mention the successors - this is really behind the scenes," Katayev said. "Lots is being said about Luzhkov, almost nothing about his successors, and not a word is being said about Moscow's actual problems."

In recent weeks Luzhkov had publically disagreed with Medvedev over the route of the new Moscow-St. Petersburg highway through the Khimki Forest and appeared to attempt to split Prime Minister Vladimir Putin from his protegee. That turned out to be a mistake.

"That friendship [between Luzhkov and Putin] was a myth - good relations are not the same as friendship," noted Alexi Mukhin, director of the Center for Political Information.

"It's a kind of lose-lose political situation," said Pavel Baev of the Peace Research Institute in Oslo. "And the loser is not just Luzhkov but [Putin and Medvedev] as well, because neither of them wants to have Luzhkov as an enemy."

As the war of words escalated, Medvedev was backed into a corner by his own and Luzhkov's. The result was "a force majeure situation for the president: either he sacks this rebellious mayor or he loses political face completely," Baev said. When Luzhkov finally made it clear he would not fall on his own sword, Medvedev had no choice but to wield the axe himself. Now the search is on for a replacement.

The front runner seems to be White House Chief of Staff and former Tyumen Region Governor Sergei Sobyanin, said Vyacheslav Glazichayev, a member of the Public Chamber and a long-standing Luzhkov critic. "He would be the expedient variant. But if it's someone from Luzhkov's team, nothing will change," he said.

A new mayor will not mean big changes in the capital in the foreseeable future. Galzichayev said that Luzhkov had "created such a powerful construction that a new team will have to spend a minimum of six months on analysis," before they try to reform anything.

Critics say none of his potential replacements will be able to boast Luzhkov's public mandate. He was democratically elected three times, the last in 2003, and his supporters still insist that given the opportunity he could win again. Interfax reported Tuesday that Luzhkov has vowed to campaign for a return to his post in the mayoral elections.

Luzhkov, who has ruled Moscow since 1992, has seen his approval rating fall from an unassailable 60 percent to near ambivalence in recent years. An emergency poll by the state owned VTsIOM pollster released Tuesday found that 33 percent of respondents thought he was effective, 34 ineffective and another 34 percent could not answer (the pollster did not account for the extra percentage point).

Luzhkov may have lost his job, but he is still a powerful figure, and "Medvedev has made an enemy of a caliber that could very well prove too much for him," Baev said.

By Tuesday afternoon, it was announced Luzhkov had quit the ruling party United Russia - apparently days before being sacked - which he co-founded. That leaves some wondering if he is prepared to go to the polls again against the Kremlin once again.

"He could go into the opposition, either within United Russia or outside it," said Katayev, a member of the Moscow board of the Solidarnost movement and a democrat Moscow City Duma Deputy from 1990 to 2005. "I don't really believe in this, but for the provinces Luzhkov is a very attractive figure thanks to the fact that Moscow is a relatively well-off city."

"He's not your regular Russian political animal. He's his own man, and a very strong headed one at that," Baev said. "He will not remain silent, I suspect. He has things to say, and probably the essence of the thing is that the formulation in Medvedev's decree about the presidential loss of confidence is mutual - as he has also lost confidence in this president."

He may have a tough time finding allies though. Luzhkov has crossed swords with the liberal opposition many times, and is unlikely to be welcomed in their ranks.

The only option left would be to form his own new party - a danger Mukhin reckons the Kremlin is all too aware of: by leaving the ouster so late they hope Luzhkov will not have time to form a new political party before parliamentary elections next year, he said.