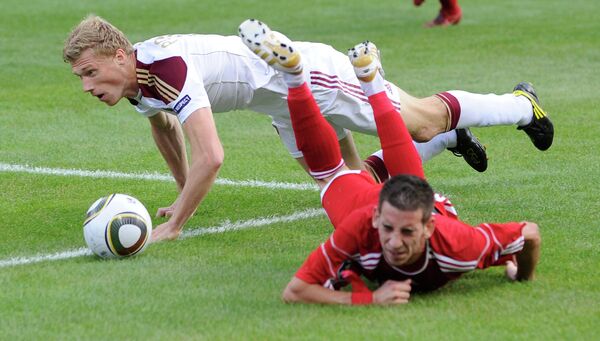 Two goals from Stuttgart striker Pavel Pogrebnyak saw off the footballing minnows of Andorra on Friday evening as Russia kicked off their Euro 2012 qualifying campaign with the expected three points.

In Dutch trainer Dick Advocaat's first competitive game, the striker he bought and sold while coach of Zenit St. Petersburg eased any Russian nerves with a goal inside 15 minutes. Latching on to captain Andrei Arshavin's perfectly weighted through-ball, Pogrebnyak side-stepped the challenge of the last defender before steadying himself and slotting home past Andorran keeper Jose Antonio Gomes.

Although the home side did twice sting Igor Akinfeev's fingers with long-range shots the Russian goalkeeper failed to hold, they otherwise rarely threatened the Russian goal.

So it fell to Russia to provide the entertainment, but despite the busy prodding of Arsenal's Arshavin and several saves that Gomes appeared to know little about, there was little to get the spattering of Russians in the tiny stadium out of their seats.

The game was made doubly safe in the 64th minute, when substitute Alan Dzagoev ran onto another Arshavin pass and fell under the slightest of contact from the Andorran keeper. Brushing off the protests of the hosts, the referee pointed to the spot and Pogrebnyak dispatched the penalty with aplomb.

Also in Group B, the Republic of Ireland won 1-0 in Armenia thanks to a 76th-minute goal from substitute Keith Fahey.

The Russian team will now return to Moscow for Tuesday's game against Slovakia, who impressed in this summer's World Cup, beating Italy to advance from the group stage before falling to eventual runners-up the Netherlands 2-1. Slovakia play Macedonia in Bratislava later on Friday.